Referral rates for diagnostic testing support an incidence of permanent neonatal diabetes in three European countries of at least 1 in 260,000 live births 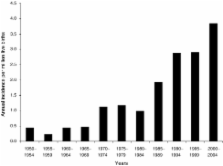 Anna L. Gloyn,  Ewan Pearson,  Jennifer F Antcliff … (2004)
Patients with permanent neonatal diabetes usually present within the first three months of life and require insulin treatment. In most, the cause is unknown. Because ATP-sensitive potassium (K(ATP)) channels mediate glucose-stimulated insulin secretion from the pancreatic beta cells, we hypothesized that activating mutations in the gene encoding the Kir6.2 subunit of this channel (KCNJ11) cause neonatal diabetes. We sequenced the KCNJ11 gene in 29 patients with permanent neonatal diabetes. The insulin secretory response to intravenous glucagon, glucose, and the sulfonylurea tolbutamide was assessed in patients who had mutations in the gene. Six novel, heterozygous missense mutations were identified in 10 of the 29 patients. In two patients the diabetes was familial, and in eight it arose from a spontaneous mutation. Their neonatal diabetes was characterized by ketoacidosis or marked hyperglycemia and was treated with insulin. Patients did not secrete insulin in response to glucose or glucagon but did secrete insulin in response to tolbutamide. Four of the patients also had severe developmental delay and muscle weakness; three of them also had epilepsy and mild dysmorphic features. When the most common mutation in Kir6.2 was coexpressed with sulfonylurea receptor 1 in Xenopus laevis oocytes, the ability of ATP to block mutant K(ATP) channels was greatly reduced. Heterozygous activating mutations in the gene encoding Kir6.2 cause permanent neonatal diabetes and may also be associated with developmental delay, muscle weakness, and epilepsy. Identification of the genetic cause of permanent neonatal diabetes may facilitate the treatment of this disease with sulfonylureas. Copyright 2004 Massachusetts Medical Society

Switching from insulin to oral sulfonylureas in patients with diabetes due to Kir6.2 mutations.

Ewan Pearson,  Isabelle Flechtner,  Pål R. Njølstad … (2006)
Heterozygous activating mutations in KCNJ11, encoding the Kir6.2 subunit of the ATP-sensitive potassium (K(ATP)) channel, cause 30 to 58 percent of cases of diabetes diagnosed in patients under six months of age. Patients present with ketoacidosis or severe hyperglycemia and are treated with insulin. Diabetes results from impaired insulin secretion caused by a failure of the beta-cell K(ATP) channel to close in response to increased intracellular ATP. Sulfonylureas close the K(ATP) channel by an ATP-independent route. We assessed glycemic control in 49 consecutive patients with Kir6.2 mutations who received appropriate doses of sulfonylureas and, in smaller subgroups, investigated the insulin secretory responses to intravenous and oral glucose, a mixed meal, and glucagon. The response of mutant K(ATP) channels to the sulfonylurea tolbutamide was assayed in xenopus oocytes. A total of 44 patients (90 percent) successfully discontinued insulin after receiving sulfonylureas. The extent of the tolbutamide blockade of K(ATP) channels in vitro reflected the response seen in patients. Glycated hemoglobin levels improved in all patients who switched to sulfonylurea therapy (from 8.1 percent before treatment to 6.4 percent after 12 weeks of treatment, P<0.001). Improved glycemic control was sustained at one year. Sulfonylurea treatment increased insulin secretion, which was more highly stimulated by oral glucose or a mixed meal than by intravenous glucose. Exogenous glucagon increased insulin secretion only in the presence of sulfonylureas. Sulfonylurea therapy is safe in the short term for patients with diabetes caused by KCNJ11 mutations and is probably more effective than insulin therapy. This pharmacogenetic response to sulfonylureas may result from the closing of mutant K(ATP) channels, thereby increasing insulin secretion in response to incretins and glucose metabolism. (ClinicalTrials.gov number, NCT00334711 [ClinicalTrials.gov].). Copyright 2006 Massachusetts Medical Society.

Effective treatment with oral sulfonylureas in patients with diabetes due to sulfonylurea receptor 1 (SUR1) mutations.