Sexual dimorphism of oxytocin and vasopressin in social cognition and behavior 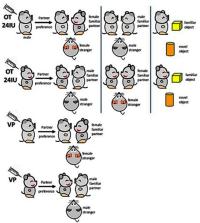 The neuropeptides oxytocin (OT) and vasopressin (VP) are hormones that are known to mediate social behavior and cognition, but their influence may be sex-dependent. This paper aims to provide a comprehensive review of the sex-related influence of OT and VP on social cognition, focusing on partner preference and sexual orientation, trust and relevant behaviors, memory modulation, and emotion regulation. Most studies have suggested that OT facilitates familiar-partner preference in both sexes, with females being more significant, increased trust in others, especially for male, enhanced memory in either sex, and reduced anxious emotion in males. However, VP-regulated social cognition has been less studied. Other relevant studies have indicated that VP facilitated familiar-partner preference, improved memory, induced empathy formation, increased positive-emotion recognition, and induced anxiety without any sex difference. However, there was a male preponderance among studies, and results were often too complex to draw firm conclusions. Clarifying the interplay between OT/VP and sex hormones in the regulation of social cognition is necessary for further applications.

Oxytocin, vasopressin, and the neurogenetics of sociality.

Vasopressin and oxytocin release within the brain: a dynamic concept of multiple and variable modes of neuropeptide communication.

Rainer Landgraf,  Inga Neumann (2015)
As exemplified particularly with vasopressin and oxytocin, release of neuropeptides within the brain occurs from dendrites, somata, and axons of neurosecretory neurons; mechanisms include activation of intracellular Ca2+ stores, changed strength of synaptic input and altered interaction between transcription factors and gene promoters. Upon demand, both diffuse spread of neuropeptides in the extracellular fluid following dendritic release and focal release from axonal terminals may contribute to regionally and temporally varying combinations of neuromodulator and neurotransmitter actions, thus providing a theoretically unlimited variability in interneuronal signaling. Thus, instead of favoring volume or synaptic transmission following central neuropeptide release, a more dynamic concept is presented with multiple and variable modes of release and communication. This concept considers neuropeptides in the extracellular fluid of the brain rather than those in the cerebrospinal fluid or plasma as primary signals, triggering a variety of receptor-mediated effects, including those underlying behavioral and neuroendocrine regulation and psychopathology.

Enhanced partner preference in a promiscuous species by manipulating the expression of a single gene.

Zuoxin Wang,  Daniel E Olazábal,  Douglas Young … (2004)
The molecular mechanisms underlying the evolution of complex behaviour are poorly understood. The mammalian genus Microtus provides an excellent model for investigating the evolution of social behaviour. Prairie voles (Microtus ochrogaster) exhibit a monogamous social structure in nature, whereas closely related meadow voles (Microtus pennsylvanicus) are solitary and polygamous. In male prairie voles, both vasopressin and dopamine act in the ventral forebrain to regulate selective affiliation between adult mates, known as pair bond formation, as assessed by partner preference in the laboratory. The vasopressin V1a receptor (V1aR) is expressed at higher levels in the ventral forebrain of monogamous than in promiscuous vole species, whereas dopamine receptor distribution is relatively conserved between species. Here we substantially increase partner preference formation in the socially promiscuous meadow vole by using viral vector V1aR gene transfer into the ventral forebrain. We show that a change in the expression of a single gene in the larger context of pre-existing genetic and neural circuits can profoundly alter social behaviour, providing a potential molecular mechanism for the rapid evolution of complex social behaviour.