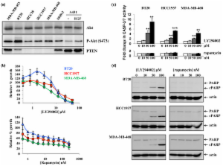 Basal-like carcinomas (BLCs) and human epidermal growth factor receptor 2 overexpressing (HER2+) carcinomas are the subgroups of breast cancers that have the most aggressive clinical behaviour. In contrast to HER2+ carcinomas, no targeted therapy is currently available for the treatment of patients with BLCs. In order to discover potential therapeutic targets, we aimed to discover deregulated signalling pathways in human BLCs.

In this study, we focused on the oncogenic phosphatidylinositol 3-kinase (PI3K) pathway in 13 BLCs, and compared it with a control series of 11 hormonal receptor negative- and grade III-matched HER2+ carcinomas. The two tumour populations were first characterised by immunohistochemistry and gene expression. The PI3K pathway was then investigated by gene copy-number analysis, gene expression profiling and at a proteomic level using reverse-phase protein array technology and tissue microarray. The effects of the PI3K inhibition pathway on proliferation and apoptosis was further analysed in three human basal-like cell lines.

The PI3K pathway was found to be activated in BLCs and up-regulated compared with HER2+ tumours as shown by a significantly increased activation of the downstream targets Akt and mTOR (mammalian target of rapamycin). BLCs expressed significantly lower levels of the tumour suppressor PTEN and PTEN levels were significantly negatively correlated with Akt activity within that population. PTEN protein expression correlated significantly with PTEN DNA copy number and more importantly, reduced PTEN DNA copy numbers were observed specifically in BLCs. Similar to human samples, basal-like cell lines exhibited an activation of PI3K/Akt pathway and low/lack PTEN expression. Both PI3K and mTOR inhibitors led to basal-like cell growth arrest. However, apoptosis was specifically observed after PI3K inhibition.

These data provide insight into the molecular pathogenesis of BLCs and implicate the PTEN-dependent activated Akt signalling pathway as a potential therapeutic target for the management of patients with poor prognosis BLCs.

Massimo Cristofanilli,  Roman Rouzier,  Jeffrey Ross … (2005)
Molecular classification of breast cancer has been proposed based on gene expression profiles of human tumors. Luminal, basal-like, normal-like, and erbB2+ subgroups were identified and were shown to have different prognoses. The goal of this research was to determine if these different molecular subtypes of breast cancer also respond differently to preoperative chemotherapy. Fine needle aspirations of 82 breast cancers were obtained before starting preoperative paclitaxel followed by 5-fluorouracil, doxorubicin, and cyclophosphamide chemotherapy. Gene expression profiling was done with Affymetrix U133A microarrays and the previously reported "breast intrinsic" gene set was used for hierarchical clustering and multidimensional scaling to assign molecular class. The basal-like and erbB2+ subgroups were associated with the highest rates of pathologic complete response (CR), 45% [95% confidence interval (95% CI), 24-68] and 45% (95% CI, 23-68), respectively, whereas the luminal tumors had a pathologic CR rate of 6% (95% CI, 1-21). No pathologic CR was observed among the normal-like cancers (95% CI, 0-31). Molecular class was not independent of conventional cliniocopathologic predictors of response such as estrogen receptor status and nuclear grade. None of the 61 genes associated with pathologic CR in the basal-like group were associated with pathologic CR in the erbB2+ group, suggesting that the molecular mechanisms of chemotherapy sensitivity may vary between these two estrogen receptor-negative subtypes. The basal-like and erbB2+ subtypes of breast cancer are more sensitive to paclitaxel- and doxorubicin-containing preoperative chemotherapy than the luminal and normal-like cancers.

An integrative genomic and proteomic analysis of PIK3CA, PTEN, and AKT mutations in breast cancer.

Kristiaan Gaag,  Bryan T J Hennessy,  Mien-Chie Hung … (2008)
Phosphatidylinositol 3-kinase (PI3K)/AKT pathway aberrations are common in cancer. By applying mass spectroscopy-based sequencing and reverse-phase protein arrays to 547 human breast cancers and 41 cell lines, we determined the subtype specificity and signaling effects of PIK3CA, AKT, and PTEN mutations and the effects of PIK3CA mutations on responsiveness to PI3K inhibition in vitro and on outcome after adjuvant tamoxifen. PIK3CA mutations were more common in hormone receptor-positive (34.5%) and HER2-positive (22.7%) than in basal-like tumors (8.3%). AKT1 (1.4%) and PTEN (2.3%) mutations were restricted to hormone receptor-positive cancers. Unlike AKT1 mutations that were absent from cell lines, PIK3CA (39%) and PTEN (20%) mutations were more common in cell lines than tumors, suggesting a selection for these but not AKT1 mutations during adaptation to culture. PIK3CA mutations did not have a significant effect on outcome after adjuvant tamoxifen therapy in 157 hormone receptor-positive breast cancer patients. PIK3CA mutations, in comparison with PTEN loss and AKT1 mutations, were associated with significantly less and inconsistent activation of AKT and of downstream PI3K/AKT signaling in tumors and cell lines. PTEN loss and PIK3CA mutation were frequently concordant, suggesting different contributions to pathophysiology. PTEN loss rendered cells significantly more sensitive to growth inhibition by the PI3K inhibitor LY294002 than did PIK3CA mutations. Thus, PI3K pathway aberrations likely play a distinct role in the pathogenesis of different breast cancer subtypes. The specific aberration present may have implications for the selection of PI3K-targeted therapies in hormone receptor-positive breast cancer.

A transforming mutation in the pleckstrin homology domain of AKT1 in cancer.

Galen Hostetter,  Greg Tucker,  Gregory P Donoho … (2007)
Although AKT1 (v-akt murine thymoma viral oncogene homologue 1) kinase is a central member of possibly the most frequently activated proliferation and survival pathway in cancer, mutation of AKT1 has not been widely reported. Here we report the identification of a somatic mutation in human breast, colorectal and ovarian cancers that results in a glutamic acid to lysine substitution at amino acid 17 (E17K) in the lipid-binding pocket of AKT1. Lys 17 alters the electrostatic interactions of the pocket and forms new hydrogen bonds with a phosphoinositide ligand. This mutation activates AKT1 by means of pathological localization to the plasma membrane, stimulates downstream signalling, transforms cells and induces leukaemia in mice. This mechanism indicates a direct role of AKT1 in human cancer, and adds to the known genetic alterations that promote oncogenesis through the phosphatidylinositol-3-OH kinase/AKT pathway. Furthermore, the E17K substitution decreases the sensitivity to an allosteric kinase inhibitor, so this mutation may have important clinical utility for AKT drug development.