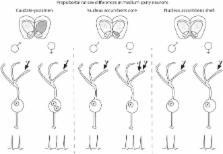 Steroid sex hormones and biological sex influence how the brain regulates motivated behavior, reward, and sensorimotor function in both normal and pathological contexts. Investigations into the underlying neural mechanisms have targeted the striatal brain regions, including the caudate–putamen, nucleus accumbens core (AcbC), and shell. These brain regions are of particular interest to neuroendocrinologists given that they express membrane-associated but not nuclear estrogen receptors, and also the well-established role of the sex steroid hormone 17β-estradiol (estradiol) in modulating striatal dopamine systems. Indeed, output neurons of the striatum, the medium spiny neurons (MSNs), exhibit estradiol sensitivity and sex differences in electrophysiological properties. Here, we review sex differences in rat MSN glutamatergic synaptic input and intrinsic excitability across striatal regions, including evidence for estradiol-mediated sexual differentiation in the nucleus AcbC. In prepubertal animals, female MSNs in the caudate–putamen exhibit a greater intrinsic excitability relative to male MSNs, but no sex differences are detected in excitatory synaptic input. Alternatively, female MSNs in the nucleus AcbC exhibit increased excitatory synaptic input relative to male MSNs, but no sex differences in intrinsic excitability were detected. Increased excitatory synaptic input onto female MSNs in the nucleus AcbC is abolished after masculinizing estradiol or testosterone exposure during the neonatal critical period. No sex differences are detected in MSNs in prepubertal nucleus accumbens shell. Thus, despite possessing the same neuron type, striatal regions exhibit heterogeneity in sex differences in MSN electrophysiological properties, which likely contribute to the sex differences observed in striatal function.

Lauren A. O'Connell,  Hans A. Hofmann (2011)
All animals evaluate the salience of external stimuli and integrate them with internal physiological information into adaptive behavior. Natural and sexual selection impinge on these processes, yet our understanding of behavioral decision-making mechanisms and their evolution is still very limited. Insights from mammals indicate that two neural circuits are of crucial importance in this context: the social behavior network and the mesolimbic reward system. Here we review evidence from neurochemical, tract-tracing, developmental, and functional lesion/stimulation studies that delineates homology relationships for most of the nodes of these two circuits across the five major vertebrate lineages: mammals, birds, reptiles, amphibians, and teleost fish. We provide for the first time a comprehensive comparative analysis of the two neural circuits and conclude that they were already present in early vertebrates. We also propose that these circuits form a larger social decision-making (SDM) network that regulates adaptive behavior. Our synthesis thus provides an important foundation for understanding the evolution of the neural mechanisms underlying reward processing and behavioral regulation. Copyright © 2011 Wiley-Liss, Inc.

Structural plasticity associated with exposure to drugs of abuse.

Camenzind G Robinson,  Robert Robinson,  Bryan Kolb (2003)
Persistent changes in behavior and psychological function that occur as a function of experience, such those associated with learning and memory, are thought to be due to the reorganization of synaptic connections (structural plasticity) in relevant brain circuits. Some of the most compelling examples of experience-dependent changes in behavior and psychological function, changes that can last a lifetime, are those that accrue with the development of addictions. However, until recently, there has been almost no research on whether potentially addictive drugs produce forms of structural plasticity similar to those associated with other forms of experience-dependent plasticity. In this paper we summarize evidence that, indeed, exposure to amphetamine, cocaine, nicotine or morphine produces persistent changes in the structure of dendrites and dendritic spines on cells in brain regions involved in incentive motivation and reward (such as the nucleus accumbens), and judgment and the inhibitory control of behavior (such as the prefrontal cortex). It is suggested that structural plasticity associated with exposure to drugs of abuse reflects a reorganization of patterns of synaptic connectivity in these neural systems, a reorganization that alters their operation, thus contributing to some of the persistent sequela associated with drug use--including addiction.

E. Gould,  CS Woolley,  M Frankfurt … (1990)
Gonadal steroids are known to influence hippocampal physiology in adulthood. It is presently unknown whether gonadal steroids influence the morphology of hippocampal neurons in the adult intact rat brain. In order to determine whether female sex hormones influence hippocampal morphology in the intact adult, we performed Golgi impregnation on brains from ovariectomized rats and ovariectomized rats which received estradiol or estradiol and progesterone replacement. Removal of circulating gonadal steroids by ovariectomy of adult female rats resulted in a profound decrease in dendritic spine density in CA1 pyramidal cells of the hippocampus. Estradiol replacement prevented the observed decrease in dendritic spine density; progesterone augmented the effect of estradiol within a short time period (5 hr). Ovariectomy or gonadal steroid replacement did not affect spine density of CA3 pyramidal cells or granule cells of the dentate gyrus. These results demonstrate that gonadal steroids are necessary for the maintenance of normal adult CA1 hippocampal pyramidal cell structure. The short time course required to observe these effects (3 d for the estradiol effect and 5 hr for the progesterone effect) implies that CA1 pyramidal cell dendritic spine density may fluctuate during the normal (4-5 d) rat estrous cycle.

Specialty section: This article was submitted to Neuroendocrine Science, a section of the journal Frontiers in Endocrinology