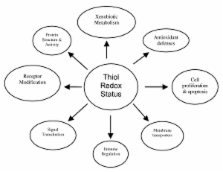 Journal: Journal of the International Society of Sports Nutrition

An increase in exercise intensity is one of the many ways in which oxidative stress and free radical production has been shown to increase inside our cells. Effective regulation of the cellular balance between oxidation and antioxidation is important when considering cellular function and DNA integrity as well as the signal transduction of gene expression. Many pathological states, such as cancer, Parkinson's disease, and Alzheimer's disease have been shown to be related to the redox state of cells. In an attempt to minimize the onset of oxidative stress, supplementation with various known antioxidants has been suggested. Glutathione and N-acetyl-cysteine (NAC) are antioxidants which are quite popular for their ability to minimize oxidative stress and the downstream negative effects thought to be associated with oxidative stress. Glutathione is largely known to minimize the lipid peroxidation of cellular membranes and other such targets that is known to occur with oxidative stress. N-acetyl-cysteine is a by-product of glutathione and is popular due to its cysteine residues and the role it has on glutathione maintenance and metabolism. The process of oxidative stress is a complicated, inter-twined series of events which quite possibly is related to many other cellular processes. Exercise enthusiasts and researchers have become interested in recent years to identify any means to help minimize the detrimental effects of oxidative stress that are commonly associated with intense and unaccustomed exercise. It is possible that a decrease in the amount of oxidative stress a cell is exposed to could increase health and performance.

Antioxidants: what role do they play in physical activity and health?

John Clarkson,  R Thompson (2000)
Exercise appears to increase reactive oxygen species, which can result in damage to cells. Exercise results in increased amounts of malondialdehyde in blood and pentane in breath; both serve as indirect indicators of lipid peroxidation. However, not all studies report increases; these equivocal results may be due to the large intersubject variability in response or the nonspecificity of the assays. Some studies have reported that supplementation with vitamins C and E, other antioxidants, or antioxidant mixtures can reduce symptoms or indicators of oxidative stress as a result of exercise. However, these supplements appear to have no beneficial effect on performance. Exercise training seems to reduce the oxidative stress of exercise, such that trained athletes show less evidence of lipid peroxidation for a given bout of exercise and an enhanced defense system in relation to untrained subjects. Whether the body's natural antioxidant defense system is sufficient to counteract the increase in reactive oxygen species with exercise or whether additional exogenous supplements are needed is not known, although trained athletes who received antioxidant supplements show evidence of reduced oxidative stress. Until research fully substantiates that the long-term use of antioxidants is safe and effective, the prudent recommendation for physically active individuals is to ingest a diet rich in antioxidants.

Jackie W K Chan,  Jared Decker (1993)
Skeletal muscle is susceptible to oxidative deterioration due to a combination of lipid oxidation catalysts and membrane lipid systems that are high in unsaturated fatty acids. To prevent or delay oxidation reactions, several endogenous antioxidant systems are found in muscle tissue. These include alpha-tocopherol, histidine-containing dipeptides, and antioxidant enzymes such as glutathione peroxidase, superoxide dismutase, and catalase. The contribution of alpha-tocopherol to the oxidative stability of skeletal muscle is largely influenced by diet. Dietary supplementation of tocopherol has been shown to increase muscle alpha-tocopherol concentrations and inhibit both lipid oxidation and color deterioration. Dietary selenium supplementation has also been shown to increase the oxidative stability of muscle presumably by increasing the activity of glutathione peroxidase. The oxidative stability of skeletal muscle is also influenced by the histidine-containing dipeptides, carnosine and anserine. Whereas carnosine and anserine are affected by diet less than alpha-tocopherol and glutathione peroxidase, their concentrations vary widely with species and muscle type. In pigs, beef, and turkey muscle, carnosine concentrations are greater than anserine, while the opposite is true in rabbit, salmon, and chicken muscle. Anserine and carnosine are found in greater concentrations in muscle high in white fibers, with chicken white muscle containing over fivefold more anserine and carnosine than red muscle. Anserine and carnosine are thought to inhibit lipid oxidation by a combination of free radical scavenging and metal chelation.

Supplementation with vitamin C and N-acetyl-cysteine increases oxidative stress in humans after an acute muscle injury induced by eccentric exercise.

Sander Leeuwenburgh,  B Halliwell,  Robert Childs … (2001)
There has been no investigation to determine if the widely used over-the-counter, water-soluble antioxidants vitamin C and N-acetyl-cysteine (NAC) could act as pro-oxidants in humans during inflammatory conditions. We induced an acute-phase inflammatory response by an eccentric arm muscle injury. The inflammation was characterized by edema, swelling, pain, and increases in plasma inflammatory indicators, myeloperoxidase and interleukin-6. Immediately following the injury, subjects consumed a placebo or vitamin C (12.5 mg/kg body weight) and NAC (10 mg/kg body weight) for 7 d. The resulting muscle injury caused increased levels of serum bleomycin-detectable iron and the amount of iron was higher in the vitamin C and NAC group. The concentrations of lactate dehydrogenase (LDH), creatine kinase (CK), and myoglobin were significantly elevated 2, 3, and 4 d postinjury and returned to baseline levels by day 7. In addition, LDH and CK activities were elevated to a greater extent in the vitamin C and NAC group. Levels of markers for oxidative stress (lipid hydroperoxides and 8-iso prostaglandin F2alpha; 8-Iso-PGF2alpha) and antioxidant enzyme activities were also elevated post-injury. The subjects receiving vitamin C and NAC had higher levels of lipid hydroperoxides and 8-Iso-PGF2alpha 2 d after the exercise. This acute human inflammatory model strongly suggests that vitamin C and NAC supplementation immediately post-injury, transiently increases tissue damage and oxidative stress.