A genome-wide association study of kynurenic acid in cerebrospinal fluid: implications for psychosis and cognitive impairment in bipolar disorder 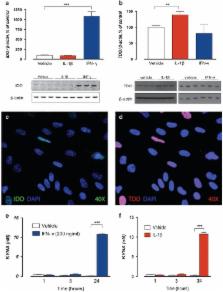 Elevated cerebrospinal fluid (CSF) levels of the glia-derived N-methyl-D-aspartic acid receptor antagonist kynurenic acid (KYNA) have consistently been implicated in schizophrenia and bipolar disorder. Here, we conducted a genome-wide association study based on CSF KYNA in bipolar disorder and found support for an association with a common variant within 1p21.3. After replication in an independent cohort, we linked this genetic variant—associated with reduced SNX7 expression—to positive psychotic symptoms and executive function deficits in bipolar disorder. A series of post-mortem brain tissue and in vitro experiments suggested SNX7 downregulation to result in a caspase-8-driven activation of interleukin-1β and a subsequent induction of the brain kynurenine pathway. The current study demonstrates the potential of using biomarkers in genetic studies of psychiatric disorders, and may help to identify novel drug targets in bipolar disorder.

Temporal dynamics and genetic control of transcription in the human prefrontal cortex.

Carlo Colantuoni,  Barbara K. Lipska,  Tianzhang Ye … (2011)
Previous investigations have combined transcriptional and genetic analyses in human cell lines, but few have applied these techniques to human neural tissue. To gain a global molecular perspective on the role of the human genome in cortical development, function and ageing, we explore the temporal dynamics and genetic control of transcription in human prefrontal cortex in an extensive series of post-mortem brains from fetal development through ageing. We discover a wave of gene expression changes occurring during fetal development which are reversed in early postnatal life. One half-century later in life, this pattern of reversals is mirrored in ageing and in neurodegeneration. Although we identify thousands of robust associations of individual genetic polymorphisms with gene expression, we also demonstrate that there is no association between the total extent of genetic differences between subjects and the global similarity of their transcriptional profiles. Hence, the human genome produces a consistent molecular architecture in the prefrontal cortex, despite millions of genetic differences across individuals and races. To enable further discovery, this entire data set is freely available (from Gene Expression Omnibus: accession GSE30272; and dbGaP: accession phs000417.v1.p1) and can also be interrogated via a biologist-friendly stand-alone application (http://www.libd.org/braincloud).

The Architecture of Gene Regulatory Variation across Multiple Human Tissues: The MuTHER Study

Bertrand Joseph,  Albert Garcia-Quintanilla,  Nabil Hajji … (2011)
Activation of microglia and inflammation-mediated neurotoxicity are suggested to play a decisive role in the pathogenesis of several neurodegenerative disorders. Activated microglia release pro-inflammatory factors that may be neurotoxic. Here we show that the orderly activation of caspase-8 and caspase-3/7, known executioners of apoptotic cell death, regulate microglia activation through a protein kinase C (PKC)-δ-dependent pathway. We find that stimulation of microglia with various inflammogens activates caspase-8 and caspase-3/7 in microglia without triggering cell death in vitro and in vivo. Knockdown or chemical inhibition of each of these caspases hindered microglia activation and consequently reduced neurotoxicity. We observe that these caspases are activated in microglia in the ventral mesencephalon of Parkinson's disease (PD) and the frontal cortex of individuals with Alzheimer's disease (AD). Taken together, we show that caspase-8 and caspase-3/7 are involved in regulating microglia activation. We conclude that inhibition of these caspases could be neuroprotective by targeting the microglia rather than the neurons themselves.

These two authors contributed equally to this work.