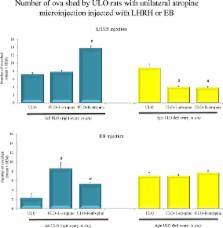 Muscarinic receptors (mAChRs) of the preoptic and anterior hypothalamus areas (POA-AHA) regulate ovulation in an asymmetric manner during the estrous cycle. The aims of the present study were to analyze the effects of a temporal blockade of mAChRs on either side of the POA-AHA performed in diestrus-2 rats on ovulation, the levels of estradiol, follicle stimulating hormone (FSH) and luteinizing hormone (LH) and the mechanisms involved in changes in ovulation.

Cyclic rats on diestrus-2 day were anesthetized and randomly assigned to the following groups: 1) microinjection of 1 μl of saline or atropine solution (62.5 ng) in the left or right POA-AHA; 2) removal (unilateral ovariectomty, ULO) of the left (L-ULO) or right (R-ULO) ovary, and 3) rats microinjected with atropine into the left or right POA-AHA plus L-ULO or R-ULO. The ovulation rate and the number of ova shed were measured during the predicted estrus, as well as the levels of estradiol, FSH and LH during the predicted proestrus and the effects of injecting synthetic LH-releasing hormone (LHRH) or estradiol benzoate (EB).

These results indicated that the removal of a single ovary at noon on diestrus-2 day perturbed the neuronal pathways regulating LH secretion, which was mediated by the muscarinic system connecting the right POA-AHA and the ovaries.

M. Borrás,  L. Hardy,  F Lempereur … (1994)
Incubation of MCF-7 cells with estradiol (E2) down-regulates estrogen receptor (ER) resulting in a progressive reduction of the capacity of cells to concentrate selectively [3H]E2. Scatchard plot analysis failed to detect any transformation of residual receptors into peptides of lower binding affinity. [3H]Estrone gave an identical ER disappearance pattern with an ER half-life comprised between 2 and 3 h. A similar value was established by incubating the cells with [3H]tamoxifenaziridine ([3H]TAZ) for 1 h before the addition of excessive unlabeled E2 which induced ER-down regulation and impeded any further labeling of the residual receptors. Submission of the [3H]TAZ labeled cell extracts to SDS-PAGE revealed no progressive emergence of low molecular weight cleavage products of the receptor (< 67 kDa). Two inhibitors of protein kinases, H-7 at 40 microM and H-89 at 20 microM, failed to block the E2-induced ER down-regulation. On the contrary, the protein phosphatases 1 and 2A inhibitor, okadaic acid, was effective with concentrations higher than 0.1 microM indicating that a dephosphorylation mechanism was involved in this phenomenon. Cycloheximide (CHX) also significantly reduced the receptor decrease at concentrations higher than 1 microM. G-C specific intercalating agents [actinomycin D (AMD) and chromomycin A3 at 1 microM] also prevented ER disappearance; ethidium bromide (EB) and quinacrine were ineffective. AMD and CHX operated immediately after their addition to the medium indicating an inhibitory action on the synthesis of an RNA and/or a peptide with high turnover rate involved in ER decline. Moreover, AMD produced its suppressive effects under conditions impeding any labeling of newly synthetized receptors (i.e. [3H]TAZ with an excess of unlabeled E2) rejecting the possibility of an increasing ER production which may partially hamper its disappearance. Finally, E2-induced ER mRNA down-regulation was similarly abolished by AMD while EB and CHX were devoid of effect.

Effect of antibodies to 17beta-estradiol and progesterone on the estrous cycle of the rat.

Cholinergic afferents to gonadotropin-releasing hormone neurons of the rat.