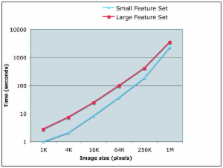 Biological imaging is an emerging field, covering a wide range of applications in biological and clinical research. However, while machinery for automated experimenting and data acquisition has been developing rapidly in the past years, automated image analysis often introduces a bottleneck in high content screening.

Wndchrm is an open source utility for biological image analysis. The software works by first extracting image content descriptors from the raw image, image transforms, and compound image transforms. Then, the most informative features are selected, and the feature vector of each image is used for classification and similarity measurement.

Wndchrm has been tested using several publicly available biological datasets, and provided results which are favorably comparable to the performance of task-specific algorithms developed for these datasets. The simple user interface allows researchers who are not knowledgeable in computer vision methods and have no background in computer programming to apply image analysis to their data.

Image analysis via the general theory of moments*

A neural network classifier capable of recognizing the patterns of all major subcellular structures in fluorescence microscope images of HeLa cells.

M. Boland,  R Murphy (2001)
Assessment of protein subcellular location is crucial to proteomics efforts since localization information provides a context for a protein's sequence, structure, and function. The work described below is the first to address the subcellular localization of proteins in a quantitative, comprehensive manner. Images for ten different subcellular patterns (including all major organelles) were collected using fluorescence microscopy. The patterns were described using a variety of numeric features, including Zernike moments, Haralick texture features, and a set of new features developed specifically for this purpose. To test the usefulness of these features, they were used to train a neural network classifier. The classifier was able to correctly recognize an average of 83% of previously unseen cells showing one of the ten patterns. The same classifier was then used to recognize previously unseen sets of homogeneously prepared cells with 98% accuracy. Algorithms were implemented using the commercial products Matlab, S-Plus, and SAS, as well as some functions written in C. The scripts and source code generated for this work are available at http://murphylab.web.cmu.edu/software. murphy@cmu.edu