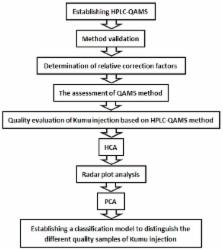 Kumu injection (KMI) is a common-used traditional Chinese medicine (TCM) preparation made from Picrasma quassioides (D. Don) Benn. rich in alkaloids. An innovative technique for quality assessment of KMI was developed using high performance liquid chromatography (HPLC) combined with chemometric methods and qualitative and quantitative analysis of multi-components by single marker (QAMS). Nigakinone (PQ-6, 5-hydroxy-4-methoxycanthin-6-one), one of the most abundant alkaloids responsible for the major pharmacological activities of Kumu, was used as a reference substance. Six alkaloids in KMI were quantified, including 6-hydroxy- β-carboline-1-carboxylic acid (PQ-1), 4,5-dimethoxycanthin-6-one (PQ-2), β-carboline-1-carboxylic acid (PQ-3), β-carboline-1-propanoic acid (PQ-4), 3-methylcanthin-5,6-dione (PQ-5), and PQ-6. Based on the outcomes of twenty batches of KMI samples, the contents of six alkaloids were used for further chemometric analysis. By hierarchical cluster analysis (HCA), radar plots, and principal component analysis (PCA), all the KMI samples could be categorized into three groups, which were closely related to production date and indicated the crucial influence of herbal raw material on end products of KMI. QAMS combined with chemometric analysis could accurately measure and clearly distinguish the different quality samples of KMI. Hence, QAMS is a feasible and promising method for the quality control of KMI.

Ruggedness and robustness of conversion factors in method of simultaneous determination of multi-components with single reference standard.

Ying Wu,  Lu Cai,  Hong Jiang … (2011)
Single standard to determine multi-components (SSDMC) is a novel and rational method for quality control of botanical products and traditional Chinese medicines (TCMs). However, it is restricted to wide application due to unknown fluctuation in conversion factors when it is performed in different laboratories. To evaluate the fluctuations of conversion factors, we selected Salvia miltiorrhiza as an example to determine three components of tanshinones by SSDMC method. Then ruggedness and robustness test were adopted to comprehensively investigate three kinds of factors that may influence stability of conversion factors, which were related with environmental parametric variables, operational parametric variables and peak measurement parametric variables. Nested-factorial-design was used to perform ruggedness tests. One-variable-at-a-time (OVAT) procedure and Plackett-Burman (PB) design were both used in robustness test. The results showed that stability of conversion factors was principally related with accuracy of wavelength of UV detector, peak measurement parameters and concentration of standard solution. The acceptable range of conversion factors was obtained from robustness test. Our results showed that conversion factors were inevitable to change, but when key parameters were well controlled, the range of its fluctuation was acceptable and the SSDMC method could be used widely in different laboratories. Copyright © 2011 Elsevier B.V. All rights reserved.

A systematic study on the influencing parameters and improvement of quantitative analysis of multi-component with single marker method using notoginseng as research subject.

Chao-qun Wang,  Xiu-Hong Jia,  Shu Zhu … (2015)
A new quantitative analysis of multi-component with single marker (QAMS) method for 11 saponins (ginsenosides Rg1, Rb1, Rg2, Rh1, Rf, Re and Rd; notoginsenosides R1, R4, Fa and K) in notoginseng was established, when 6 of these saponins were individually used as internal referring substances to investigate the influences of chemical structure, concentrations of quantitative components, and purities of the standard substances on the accuracy of the QAMS method. The results showed that the concentration of the analyte in sample solution was the major influencing parameter, whereas the other parameters had minimal influence on the accuracy of the QAMS method. A new method for calculating the relative correction factors by linear regression was established (linear regression method), which demonstrated to decrease standard method differences of the QAMS method from 1.20%±0.02% - 23.29%±3.23% to 0.10%±0.09% - 8.84%±2.85% in comparison with the previous method. And the differences between external standard method and the QAMS method using relative correction factors calculated by linear regression method were below 5% in the quantitative determination of Rg1, Re, R1, Rd and Fa in 24 notoginseng samples and Rb1 in 21 notoginseng samples. And the differences were mostly below 10% in the quantitative determination of Rf, Rg2, R4 and N-K (the differences of these 4 constituents bigger because their contents lower) in all the 24 notoginseng samples. The results indicated that the contents assayed by the new QAMS method could be considered as accurate as those assayed by external standard method. In addition, a method for determining applicable concentration ranges of the quantitative components assayed by QAMS method was established for the first time, which could ensure its high accuracy and could be applied to QAMS methods of other TCMs. The present study demonstrated the practicability of the application of the QAMS method for the quantitative analysis of multi-component and the quality control of TCMs and TCM prescriptions.

Determination and quality evaluation of green tea extracts through qualitative and quantitative analysis of multi-components by single marker (QAMS).

Wei-Dong Yan,  Da-Wei Li,  Ming Zhu … (2016)
The quality of tea is mainly attributed to tea polyphenols and caffeine. In this paper, a new strategy for quality evaluation of green tea extracts was explored and verified through qualitative and quantitative analysis of multi-components by single marker (QAMS). Taguchi Design was introduced to evaluate the fluctuations of the relative conversion factors (fx) of tea catechins, gallic acid and caffeine to epigallocatechin gallate. The regression model (Sig.=0.000) and the deviations (R(2)>0.999) between QAMS and normal external standard method proved the consistency of the two methods. Hierarchical cluster analysis and canonical discriminant analysis were employed to classify 26 batches of commercial Longjing green tea extracts (LJGTEs) collected from different producers. The results showed a significant difference in component profile between the samples from different origins. The QAMS method was verified to be an alternative and promising method to comprehensively and effectively control the quality of LJGTEs from different origins.