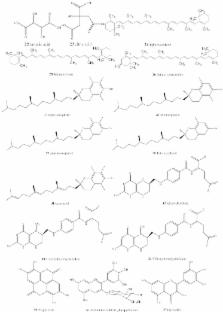 Chris Evans, Samuel Miller, G Paganga (1995)
The recent explosion of interest in the bioactivity of the flavonoids of higher plants is due, at least in part, to the potential health benefits of these polyphenolic components of major dietary constituents. This review article discusses the biological properties of the flavonoids and focuses on the relationship between their antioxidant activity, as hydrogen donating free radical scavengers, and their chemical structures. This culminates in a proposed hierarchy of antioxidant activity in the aqueous phase. The cumulative findings concerning structure-antioxidant activity relationships in the lipophilic phase derive from studies on fatty acids, liposomes, and low-density lipoproteins; the factors underlying the influence of the different classes of polyphenols in enhancing their resistance to oxidation are discussed and support the contention that the partition coefficients of the flavonoids as well as their rates of reaction with the relevant radicals define the antioxidant activities in the lipophilic phase.

Conservation of the Brazilian Cerrado

Hagen Schroeter, Christian Heiss, Jan Balzer … (2006)
Epidemiological and medical anthropological investigations suggest that flavanol-rich foods exert cardiovascular health benefits. Endothelial dysfunction, a prognostically relevant key event in atherosclerosis, is characterized by a decreased bioactivity of nitric oxide (NO) and impaired flow-mediated vasodilation (FMD). We show in healthy male adults that the ingestion of flavanol-rich cocoa was associated with acute elevations in levels of circulating NO species, an enhanced FMD response of conduit arteries, and an augmented microcirculation. In addition, the concentrations and the chemical profiles of circulating flavanol metabolites were determined, and multivariate regression analyses identified (-)-epicatechin and its metabolite, epicatechin-7-O-glucuronide, as independent predictors of the vascular effects after flavanol-rich cocoa ingestion. A mixture of flavanols/metabolites, resembling the profile and concentration of circulating flavanol compounds in plasma after cocoa ingestion, induced a relaxation in preconstricted rabbit aortic rings ex vivo, thus mimicking acetylcholine-induced relaxations. Ex vivo flavanol-induced relaxation, as well as the in vivo increases in FMD, were abolished by inhibition of NO synthase. Oral administration of chemically pure (-)-epicatechin to humans closely emulated acute vascular effects of flavanol-rich cocoa. Finally, the concept that a chronic intake of high-flavanol diets is associated with prolonged, augmented NO synthesis is supported by data that indicate a correlation between the chronic consumption of a cocoa flavanol-rich diet and the augmented urinary excretion of NO metabolites. Collectively, our data demonstrate that the human ingestion of the flavanol (-)-epicatechin is, at least in part, causally linked to the reported vascular effects observed after the consumption of flavanol-rich cocoa.