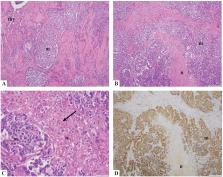 Journal: Modern pathology : an official journal of the United States and Canadian Academy of Pathology, Inc

E Kebebew,  Daniel Clark,  Quan-Yang Duh … (2000)
The clinical courses of patients with medullary thyroid carcinoma (MTC) vary, and a number of prognostic factors have been studied, but the significance of some of these factors remains controversial. The study group consisted of 104 patients with MTC or C-cell hyperplasia managed at the hospitals of the University of California, San Francisco, between January 1960 and December 1998. Patients were classified as having sporadic MTC, familial non-multiple endocrine neoplasia (MEN) MTC, MEN 2A, or MEN 2B. The TNM, European Organization for Research and Treatment of Cancer (EORTC), National Thyroid Cancer Treatment Cooperative Study (NTCTCS), and Surveillance, Epidemiology, and End Results (SEER) extent-of-disease stages were determined for each patient. The predictive values of these staging or prognostic scoring systems were compared by calculating the proportion of variance explained (PVE) for each system. Fifty-six percent of the patients had sporadic MTC, 22% had familial MTC, 15% had MEN 2A, and 7% had MEN 2B. The overall average age at diagnosis was 38 years, and patients with sporadic MTC presented at an older age (P < 0.05). Thirty-two percent of the patients with hereditary MTC were diagnosed by screening (genetic and/or biochemical). These patients had a lower incidence of cervical lymph node metastasis (P < 0.05) and 94.7% were cured at last follow-up (P < 0.0001) compared with patients not screened. Patients with sporadic MTC who had systemic symptoms (diarrhea, bone pain, or flushing) had widely metastatic MTC and 33.3% of those patients died within 5 years. Overall, 49.4% of the patients were cured, 12.3% had recurrent MTC, and 38.3% had persistent MTC. The mean follow-up time was 8.6 years (median, 5.0 years) with 10.7% (n=11) and 13.5% (n=14) cause specific mortality at 5 and 10 years, respectively. Patients with persistent or recurrent MTC who died of MTC lived for an average of 3.6 years (ranging from 1 month to 23.7 years). Patients who had total or subtotal thyroidectomy were less likely to have persistent or recurrent MTC (P < 0.05), and patients who had total thyroidectomy with cervical lymph node clearance required fewer reoperations for persistent or recurrent MTC (P < 0.05) than patients who underwent lesser procedures. In univariate analysis, age, gender, clinical presentation, TNM stage, sporadic/hereditary MTC, distant metastasis, and extent of thyroidectomy were significant prognostic factors. Only age and stage, however, remained independent prognostic factors in multivariate analysis. The TNM, EORTC, NTCTCS, and SEER staging systems were all accurate predictors of survival, but the EORTC prognostic scoring system had the highest PVE in this cohort. Screening for MTC and early treatment (total thyroidectomy with central neck lymph node clearance) had nearly a 100% cure rate. Patients with postoperative hypercalcitoninemia without clinical or radiologic evidence of residual tumor after apparently curative surgery may enjoy long term survival but have occult MTC. Only patient age at presentation and TNM stage were independent predictors of survival. The EORTC criteria, which included the greatest number of significant prognostic factors in our cohort, had the highest predictive value. Copyright 2000 American Cancer Society.