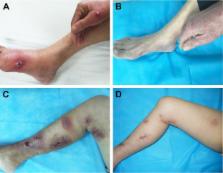 Primary cutaneous nocardiosis is a rare suppurative or granulomatous inflammation disease caused by Nocardia infection. Because of nonspecific clinical findings, it is always misdiagnosed as common pyogenic infection. Sulfonamides have been the standard treatment for nocardiosis, but the outcome is always poor due to the high rates of misdiagnosis and refractoriness of the disease.

The presented cases are patients of acute suppurative cutaneous infection without involvement of other organs. We report four cases, of which two cases were localized cutaneous nocardiosis and the other two were lymphocutaneous type of nocardiosis. All cases were diagnosed with pus culture which turned out to be Nocardia brasiliensis. We report an improvement of primary cutaneous nocardiosis symptoms in the four patients treated with non-sulfonamides. All patients were cured and recovered without recurrence during follow-up.

Our results suggest that non-sulfonamides are effective treatment for the patients with primary cutaneous nocardiosis who are resistant or intolerant to sulfonamides.

Cutaneous nocardiosis: report of two cases and review of the literature.

Roni P. Dodiuk-Gad,  Eran Cohen,  Michael Ziv … (2010)
Cutaneous nocardiosis is an uncommon infectious disease that presents as a primary cutaneous infection or as a disseminated disease. It is often misdiagnosed because of its rarity and nonspecific clinical picture.

Béatrice Berçot,  Joaquim Matéo,  Laurent Raskine … (2006)
Nocardia farcinica is an emerging pathogen in immunosuppressed patients causing both localized and disseminated infections. Many strains of this species are multidrug-resistant and require long-term antibiotic therapy, and consequently the choice of an oral treatment can be problematic. We report here the first case of successful treatment of N. farcinica brain abscess in a renal transplant recipient with an extended-spectrum fluoroquinolone, moxifloxacin.

Cutaneous manifestations of Nocardia brasiliensis infection in Taiwan during 2002-2012-clinical studies and molecular typing of pathogen by gyrB and 16S gene sequencing.

Kuo-Wei Chen,  Chun-Wei Lu,  Ting-Chi Huang … (2013)
To observe the clinicopathologic and resistance profiles of the Nocardia brasiliensis causing cutaneous nocardiosis in Taiwan, 12 N. brasiliensis isolates were prospectively collected from patients with cutaneous nocardiosis in a hospital during 2002-2012. Clinicopathologic data were obtained, and isolates were identified by biochemical methods and 16S rRNA sequencing. Susceptibilities to 14 antimicrobial compounds were tested. Isolates were further genotyped by sequencing of 16S rRNA, secA1, hsp65, and gyrB genes. The nodulopustular pyoderma associated with sporotrichoid spreading was the most common skin presentations caused by N. brasiliensis. All of the isolates were susceptible to amikacin, gentamicin, tobramycin, piperacillin/tazobactam, and trimethoprim/sulfamethoxazole and resistant to kanamycin, erythromycin, and oxacillin, while susceptibilities to imipenem, vancomycin, penicillin-G, tetracycline, clindamycin, and ciprofloxacin varied among the 12 isolates. GyrB genotyping delineated the 12 isolates into 2 major groups, which was coincident with different single nucleotide substitutions at position 160 (G versus T) of 16S rRNA, different levels of imipenem minimum inhibition concentration (4-32 versus 0.25-0.75 mg/L), and prevalence of lymphadenitis (66.7 versus 16.7%). We have noted that tiny pustular lesions can be the first sign of cutaneous nocardiosis, which we believe has not been previously emphasized. No resistance to trimethoprim and sulfamethoxazole was found; therefore, sulphonamide drugs remain effective for treatment of cutaneous nocardiosis in Taiwan.