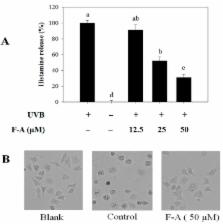 UV light, especially UVB, is known as a trigger of allergic reaction, leading to mast cell degranulation and histamine release. In this study, phlorotannin Fucofuroeckol-A (F-A) derived from brown algal Ecklonia stolonifera Okamura was evaluated for its protective capability against UVB-induced allergic reaction in RBL-2H3 mast cells. It was revealed that F-A significantly suppress mast cell degranulation via decreasing histamine release as well as intracellular Ca 2+ elevation at the concentration of 50 μM. Moreover, the inhibitory effect of F-A on IL-1β and TNF-α productions was also evidenced. Notably, the protective activity of F-A against mast cell degranulation was found due to scavenging ROS production. Accordingly, F-A from brown algal E. stolonifera was suggested to be promising candidate for its protective capability against UVB-induced allergic reaction.

The development of allergic inflammation.

Adrian Piliponsky,  Stephen J. Galli,  Mindy Tsai (2008)
Allergic disorders, such as anaphylaxis, hay fever, eczema and asthma, now afflict roughly 25% of people in the developed world. In allergic subjects, persistent or repetitive exposure to allergens, which typically are intrinsically innocuous substances common in the environment, results in chronic allergic inflammation. This in turn produces long-term changes in the structure of the affected organs and substantial abnormalities in their function. It is therefore important to understand the characteristics and consequences of acute and chronic allergic inflammation, and in particular to explore how mast cells can contribute to several features of this maladaptive pattern of immunological reactivity.

Daniela Wenzel,  Raymond Barnhill,  Meri Rogava … (2014)
Intermittent intense ultraviolet (UV) exposure represents an important aetiological factor in the development of malignant melanoma. The ability of UV radiation to cause tumour-initiating DNA mutations in melanocytes is now firmly established, but how the microenvironmental effects of UV radiation influence melanoma pathogenesis is not fully understood. Here we report that repetitive UV exposure of primary cutaneous melanomas in a genetically engineered mouse model promotes metastatic progression, independent of its tumour-initiating effects. UV irradiation enhanced the expansion of tumour cells along abluminal blood vessel surfaces and increased the number of lung metastases. This effect depended on the recruitment and activation of neutrophils, initiated by the release of high mobility group box 1 (HMGB1) from UV-damaged epidermal keratinocytes and driven by Toll-like receptor 4 (TLR4). The UV-induced neutrophilic inflammatory response stimulated angiogenesis and promoted the ability of melanoma cells to migrate towards endothelial cells and use selective motility cues on their surfaces. Our results not only reveal how UV irradiation of epidermal keratinocytes is sensed by the innate immune system, but also show that the resulting inflammatory response catalyses reciprocal melanoma-endothelial cell interactions leading to perivascular invasion, a phenomenon originally described as angiotropism in human melanomas by histopathologists. Angiotropism represents a hitherto underappreciated mechanism of metastasis that also increases the likelihood of intravasation and haematogenous dissemination. Consistent with our findings, ulcerated primary human melanomas with abundant neutrophils and reactive angiogenesis frequently show angiotropism and a high risk for metastases. Our work indicates that targeting the inflammation-induced phenotypic plasticity of melanoma cells and their association with endothelial cells represent rational strategies to specifically interfere with metastatic progression.

Effect of phlorotannins isolated from Ecklonia cava on melanogenesis and their protective effect against photo-oxidative stress induced by UV-B radiation.

Soo-Jin Heo,  Seok-Chun Ko,  Seon-Heui Cha … (2009)
In the present study, three kinds of phlorotannins, marine algal polyphenol, were isolated from a brown alga Ecklonia cava, and their inhibitory effect on melanogenesis as well as the protective effect against photo-oxidative stress induced by UV-B radiation was investigated. The effect on melanogenesis was evaluated via the inhibitory effects of tyrosinase and melanin synthesis. Among the phlorotannins, dieckol showed higher effect than that of the other phlorotannins in the both assays; especially the value of dieckol in the tyrosinase inhibition assay was relatively higher than that of a commercial tyrosinase inhibitor (kojic acid). The UV-B protection effect was evaluated via DCFH-DA, MTT, comet assays, and morphological changes in fibroblast. Intracellular ROS induced by UV-B radiation was reduced by the addition of phlorotannins and cell viability was dose-dependently increased. Moreover, dieckol demonstrated strong protective properties against UV-B radiation-induced DNA damage via damaged tail intensity and morphological changes in fibroblast. Hence, these results indicated that dieckol isolated from E. cava has potential whitening effects and prominent protective effects on UV-B radiation-induced cell damages, which might be used in pharmaceutical and cosmeceutical industries.