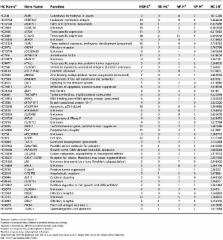 Humans and chimps diverged about 5 million years ago. This study seeks to find the genes that have undergone positive selection during the evolution of both lineages since that time.

Michael Bielawski,  K Bielawski,  Yang Yang (2000)
The past few years have seen the development of powerful statistical methods for detecting adaptive molecular evolution. These methods compare synonymous and nonsynonymous substitution rates in protein-coding genes, and regard a nonsynonymous rate elevated above the synonymous rate as evidence for darwinian selection. Numerous cases of molecular adaptation are being identified in various systems from viruses to humans. Although previous analyses averaging rates over sites and time have little power, recent methods designed to detect positive selection at individual sites and lineages have been successful. Here, we summarize recent statistical methods for detecting molecular adaptation, and discuss their limitations and possible improvements.

Q. Z. Yang,  Rasmus Nielsen (1998)
Several codon-based models for the evolution of protein-coding DNA sequences are developed that account for varying selection intensity among amino acid sites. The "neutral model" assumes two categories of sites at which amino acid replacements are either neutral or deleterious. The "positive-selection model" assumes an additional category of positively selected sites at which nonsynonymous substitutions occur at a higher rate than synonymous ones. This model is also used to identify target sites for positive selection. The models are applied to a data set of the V3 region of the HIV-1 envelope gene, sequenced at different years after the infection of one patient. The results provide strong support for variable selection intensity among amino acid sites The neutral model is rejected in favor of the positive-selection model, indicating the operation of positive selection in the region. Positively selected sites are found in both the V3 region and the flanking regions.

DOI: 10.1371/journal.pbio.0030170
PMC ID: 1088278
PubMed ID: 15869325
Copyright statement: Copyright: © 2005 Nielsen et al. This is an open-access article distributed under the terms of the Creative Commons Attribution License, which permits unrestricted use, distribution, and reproduction in any medium, provided the original work is properly cited.

Related article ( companion): Human and Chimp: Can Our Genes Tell the Story of Our Divergence?