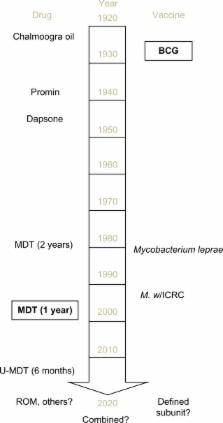 Leprosy is a complex infectious disease caused by Mycobacterium leprae that is a leading cause of nontraumatic peripheral neuropathy. Current control strategies, with a goal of early diagnosis and treatment in the form of multidrug therapy, have maintained new case reports at ~225,000 per year. Diagnostic capabilities are limited and even with revisions to multidrug therapy regimen, treatment can still require up to a year of daily drug intake. Although alternate chemotherapies or adjunct immune therapies that could provide shorter or simpler treatment regimen appear possible, only a limited number of trials have been conducted. More proactive strategies appear necessary in the drive to elimination. As a prevention strategy, most chemoprophylaxis campaigns to date have provided about a 2-year protective window. Vaccination, in the form of a single bacillus Calmette–Guérin (BCG) immunization, generally provides ~50% reduction in leprosy cases. Adapting control strategies to provide both chemoprophylaxis and immunoprophylaxis has distinct appeal, with chemoprophylaxis theoretically buttressed by vaccination to generate immediate protection that can be sustained in the long term. We also discuss simple assays measuring biomarkers as surrogates for disease development or replacements for invasive, but not particularly sensitive, direct measures of M. leprae infection. Such assays could facilitate the clinical trials required to develop these new chemoprophylaxis, immunoprophylaxis strategies, and transition into wider use.

H Salamon,  G Schoolnik,  T Behr … (1999)
Bacille Calmette-Guérin (BCG) vaccines are live attenuated strains of Mycobacterium bovis administered to prevent tuberculosis. To better understand the differences between M. tuberculosis, M. bovis, and the various BCG daughter strains, their genomic compositions were studied by performing comparative hybridization experiments on a DNA microarray. Regions deleted from BCG vaccines relative to the virulent M. tuberculosis H37Rv reference strain were confirmed by sequencing across the missing segment of the H37Rv genome. Eleven regions (encompassing 91 open reading frames) of H37Rv were found that were absent from one or more virulent strains of M. bovis. Five additional regions representing 38 open reading frames were present in M. bovis but absent from some or all BCG strains; this is evidence for the ongoing evolution of BCG strains since their original derivation. A precise understanding of the genetic differences between closely related Mycobacteria suggests rational approaches to the design of improved diagnostics and vaccines.

Classification of leprosy according to immunity. A five-group system.

Linda Oskam,  David Pahan,   … (2008)
To determine the effectiveness of chemoprophylaxis using a single dose of rifampicin to prevent leprosy in close contacts. Single centre, double blind, cluster randomised, placebo controlled trial. Leprosy control programme in two districts of northwest Bangladesh with a population of more than four million. 28,092 close contacts of 1037 patients with newly diagnosed leprosy. 21,711 contacts fulfilled the study requirements. A single dose of rifampicin or placebo given to close contacts in the second month of starting the index patient's treatment, with follow-up for four years. Development of clinical leprosy. 18,869 of the 21,711 contacts (86.9%) were followed-up at four years. Ninety one of 9452 contacts in the placebo group and 59 of 9417 in the rifampicin group had developed leprosy. The overall reduction in incidence of leprosy using a single dose of rifampicin in the first two years was 57% (95% confidence interval 33% to 72%). The groups did not differ between two and four years. The overall number needed to treat (NNT) to prevent a single case of leprosy among contacts was 297 (95% confidence interval 176 to 537). Differences were found between subgroups at two years, both in reduction of incidence and in NNT. A single dose of rifampicin given to contacts of patients with newly diagnosed leprosy is effective at preventing the development of clinical leprosy at two years. The effect was maintained, but no difference was seen between the placebo and rifampicin groups beyond two years. Current Controlled Trials ISRCTN61223447 [controlled-trials.com].