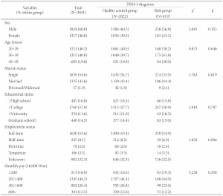 The Section III of the Diagnostic and Statistical Manual of Mental Disorders, Fifth Edition (DSM-5) proposed nine diagnostic criteria and five cut-point criteria for Internet Gaming Disorder (IGD). We aimed to examine the efficacy of such criteria.

The IGD risk group showed differential psychopathological manifestations according to DSM-5 IGD diagnostic criteria. Further studies are needed to evaluate the reliability and validity of the specific criteria, especially for developing screening instruments.

Pathological video-game use among youth ages 8 to 18: a national study.

Douglas A. Gentile (2009)
Researchers have studied whether some youth are "addicted" to video games, but previous studies have been based on regional convenience samples. Using a national sample, this study gathered information about video-gaming habits and parental involvement in gaming, to determine the percentage of youth who meet clinical-style criteria for pathological gaming. A Harris poll surveyed a randomly selected sample of 1,178 American youth ages 8 to 18. About 8% of video-game players in this sample exhibited pathological patterns of play. Several indicators documented convergent and divergent validity of the results: Pathological gamers spent twice as much time playing as nonpathological gamers and received poorer grades in school; pathological gaming also showed comorbidity with attention problems. Pathological status significantly predicted poorer school performance even after controlling for sex, age, and weekly amount of video-game play. These results confirm that pathological gaming can be measured reliably, that the construct demonstrates validity, and that it is not simply isomorphic with a high amount of play.