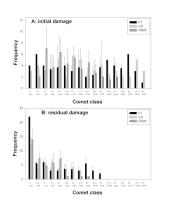 It has been shown by a number of authors that the radiosensitivity of peripheral blood mononuclear cells (PBMC) is higher in cancer patients compared to healthy donors, which is interpreted as a sign of genomic instability. PBMC are composed of different cell subpopulations which are differently radiosensitive and the difference between cancer patients and healthy donors could also be due to different composition of their PBMC pools. Gamma-delta T-lymphocytes play an important role in immunosurveillance and are promising cells for immunotherapy. Their abundance is frequently reduced in cancer patients so should their sensitivity to radiation be lower than that of other T-lymphocytes, this could, at least partly explain the low radiosensitivity of PBMC from healthy individuals compared to cancer patients. The present investigation was carried out to test this. Using the alkaline comet assay we analysed the level of DNA damage and repair in isolated γδ T-lymphocytes, pan T-lymphocytes and in total PBMC exposed in vitro to gamma radiation. We found no difference in the level of DNA damage and the capacity of DNA repair between the T cell populations. This is the first study that addresses the question of sensitivity to radiation of gamma-delta T-cells.

Human peripheral blood mononuclear cells (PBMC) are used as surrogate tissue for the assessment of individual sensitivity to ionising radiation [1]. Using the G2 chromosomal aberration assay it has been shown by a number of authors that the radiosensitivity of PBMC is higher in cancer patients compared to healthy donors [2-9]. A similar result was reported using the micronucleus assay [10] and the comet assay [11,12] and is generally interpreted as a reflection of genomic instability in PBMC of cancer patients [10].

PBMC are composed of different cell subpopulations which are differently radiosensitive. It is generally accepted that B lymphocytes show a higher radiosensitivity than T-lymphocytes that are all CD3+ [13-16]. Among the T-lymphocytes cytotoxic CD8+ cells appear somewhat more sensitive than helper CD4+ cells [16,17], although this was not observed in all studies [18]. A lymphocyte subpopulation which recently attracted interest is composed of T-lymphocytes with γδ T-cell receptors (TCR). The reason for this is the discovery that these cells contribute to immunity against cancer [19]. In peripheral blood γδ lymphocytes account for less than 5% of total T-lymphocytes while their proportion in the intestine can be much higher [20].

Given their role in immunosurveillance, the level and/or the activity of γδ T-lymphocytes is expected to be low in PBMC of cancer-prone individuals and high in PBMC of individuals who are resistant to cancer. This is supported by findings in patients with lymphoma, myeloma, breast and nasopharyngeal carcinoma [21-23]. Should the sensitivity to radiation of γδ lymphocytes be lower than that of the more common αβ T-lymphocytes, this could, at least partly explain the low radiosensitivity of PBMC from healthy individuals compared to cancer patients. The present investigation was carried out to test if there are differences in the radiation sensitivity between different TCR subtype populations by comparing the level of DNA damage and the kinetics of DNA repair in isolated γδ T-lymphocytes, pan T-lymphocytes and in total PBMC exposed in vitro to gamma radiation. Experiments were performed using the alkaline comet assay. Cells were exposed to the moderate dose of 1 Gy at 37°C. 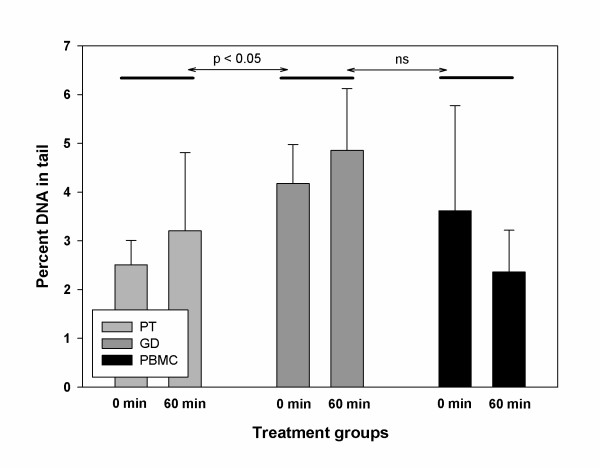 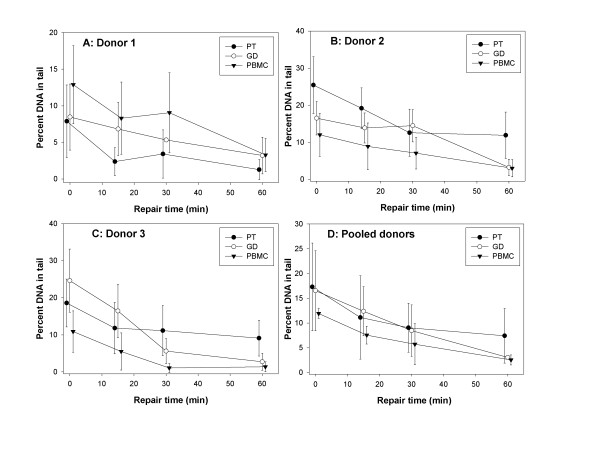 An advantage of the comet assay is the ability to analyse DNA damage in individual cells. Although we observed no difference in the mean level of DNA damage between the analysed cell subpopulations, it is possible that differences existed in the distribution patterns of cells with different level of DNA damage. In order to check this, cells were grouped into classes of % TDNA values and plotted on one graph. The results for 0 and 60 min repair are shown in figure 3. The distribution patterns of all three cell populations look similar. 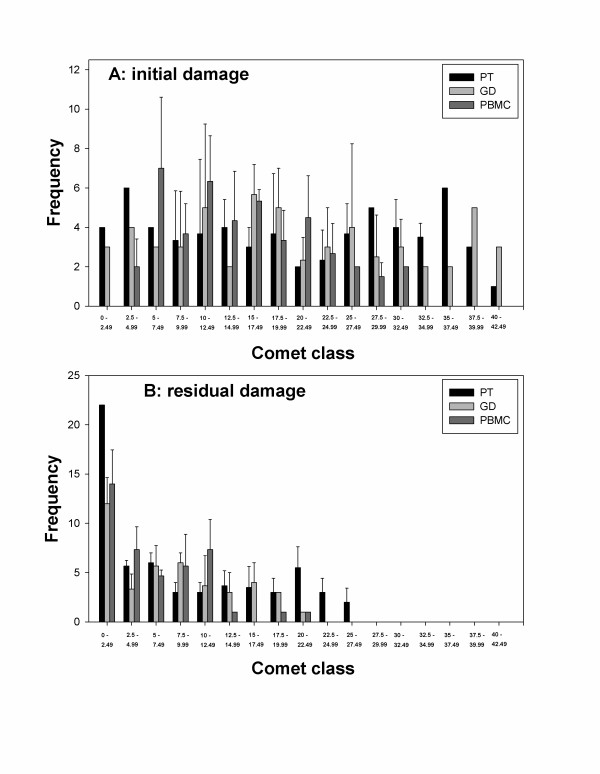 Our result shows that the low radiosensitivity of PBMC isolated from healthy donors compared to cancer patients, can not be due to a high level of γδ T-lymphocytes in the peripheral blood of the former. This does not exclude the possibility that the difference in radiosensitivity results from a different composition of lymphocyte subpopulations in healthy and cancer patients. However, this possibility has hitherto not been studied.

An interesting finding was that the level of spontaneous DNA damage was higher in γδ T-lymphocytes than in pan T-lymphocytes and in PBMC. This finding is somewhat difficult to interpret. The essential factor determining whether a segment of DNA appears in the tail rather than in the head of a comet is the relaxation of DNA supercoiling which is a consequence of DNA damage [24]. This would suggest that γδ T-lymphocytes suffer from a high level of spontaneous DNA damage. The reason for this is unclear and in our opinion the result should be treated with caution. Obviously, it must be validated by more studies.

An observation that requires a comment is the large scatter of the comet results as seen in figure 2. We scored the slides in a blind manner and the large standard deviations are due to the presence of both intact and damaged cells on the same slide. We tried to reduce the scatter by eliminating from analysis an equal number of cells with lowest and highest level of damage, but the standard deviations remained broad. A lower scatter would possibly be found if we used a higher dose of radiation than 1 Gy. This would lead to a higher level of DNA damage. However, we intentionally kept the dose at 1 Gy, because of the known high radiosensitivity of some lymphocyte subsets [25]. In our opinion a dose higher than 1 Gy could have damaged the lymphocytes to an extent that would make the results unreliable.

It should be stressed that despite our negative results related to the sensitivity of cells to radiation, γδ T-lymphocytes, in particular those having the γ9δ2 TCR, are interesting cells to exploit for immunotherapy because they specifically cause lysis of tumour cells without affecting non transformed cells [26] and clinical trials show promising results with γδ T lymphocyte immunotherapy [27]. The combination of immunotherapy with in vitro expanded γδ T-lymphocytes and radiotherapy has not been evaluated and is an avenue worth visiting.

Taken together, the results provide no evidence for different radiation sensitivity of γδ lymphocytes, pan T-lymphocytes and total PBMC. This does not exclude the possibility that the often observed difference in radiosensitivity of PBMC between cancer patients and healthy donors results from a different composition of lymphocyte subpopulations.

PBMCs were isolated from 80 ml fresh blood on a histopaque gradient. Pan T cells (CD3+, containing both αβ and γδ T-lymphocytes) were isolated from 6 × 106 PBMCs that were mixed with pan T-cell isolation beads according to the manufacturers instructions (Miltenyi Biotec Inc., Auburn, CA). T-lymphocytes being CD3+ were negatively selected on a MACS column. 4 × 106 PBMCs were kept for further experiments and pan γδ T-cells were purified from the remainder of the PBMCs assuming that 10% were γδ T-cells and adjusting the manufacturers protocol accordingly (Miltenyi Biotec Inc., Auburn, CA). γδ+ cells were positively selected on a MACS column. The cells were counted in trypan blue in a Countess Automatic Cell Counter (Intvitrogen, Carlsbad, CA) and kept at 1 × 106 per ml in RPMI medium supplemented with 2 mM L-glutamine, 100 U/ml penicillin and 100 mg/ml streptomycin at 37°C in humidified incubator under 5% CO2 and used within twenty hours for the comet assay.

Irradiation was carried out using a Scanditronix (Uppsala, Sweden) 137Cs source operating at 0.47 Gy/min. Cells were transferred to 1.5 ml Eppendorf cups, placed in 37°C water cups, irradiated with a dose of 1 Gy and immediately placed on ice to stop DNA repair. Following incubation on ice cells were kept at 37°C for 0, 15, 30 and 60 min and processed for the alkaline comet assay [28]. Two non-irradiated samples per cell type and experiment were analysed as controls following incubation at 37°C for 0 and 60 min.

Microscope slides were pre-coated with 50 μl of 0.5% normal melting agarose (BDH, Germany), and left to dry. 1.5 × 105 cells were mixed 1:1 with low melting agarose (US, Belgium) at 37°C, 100 μl of this suspension was placed on a pre-coated slide, covered with a coverslip and left to solidify at +4°C for 5 min. Thereafter the coverslips were removed and the rest of the assay was conducted at +4°C, to ensure gel stability, using only red light as the light source. The slides were immersed in lysis buffer (2.5 M NaCl, 100 mM Na2EDTA, 10 mM Tris, 1% Triton X-100, pH 10.0) for 1 hour, followed by a brief washing step in double distilled H2O for 5 min. The slides were then placed in an EC 340 Maxicell Primo (Thermo EC, Holbrook, USA) electrophoresis tank containing 1.31 L unwinding/electrophoresis buffer (1 mM Na2EDTA, 300 mM NaOH, pH 13.3). After 1 h of incubation the power supply unit (Kyoritsu P 103B, Tokyo, Japan) was switched on and ran at 32.5 V (1 V/cm), 430 mA for 25 minutes. The number of slides in the unit was constant for all experiments.

Following electrophoresis, slides were washed in neutralization buffer (0.4 M Tris), stained with 1 μM DAPI (in water, Sigma-Aldrich), covered with coverslips and stored in the dark at +4°C in a humid container until analysis the following day. Comets were scored blind using a 40× objective on a Nikon Eclipse E800 (Nikon, Tokyo, Japan) fluorescence microscope. Images were acquired and analyzed using the Comet II software (Perspective Instruments, Suffolk, UK, version 2.11). 50 cells per experiment and point were analysed.

The Comet II software yields Excel data sheets with the measurement results for each cell from a treatment group. We focused on analysing % TDNA as the marker of damage. In order to reduce data scatter, the results obtained for each treatment point were processed as follows: the % TDNA values were sorted in raising order and 5 lowest and 5 highest values were deleted. This procedure was carried out for every treatment group including the control samples. Thus, the number of cells analysed was reduced to 40. For the analysis of radiation-induced level of % TDBA, the mean (from 0 and 60 min incubation time) control level of % TDNA was subtracted.

The average values from individual experiments were compared using the 2 tailed Student's t-test.

The authors declare that they have no competing interests.

This project was funded by a grant from Johan and Jacob Söderberg's Foundation to IP and by a grant from the Swedish Radiation Protection Authority (SSM) to AW. We are grateful to J. Adler for editorial help.