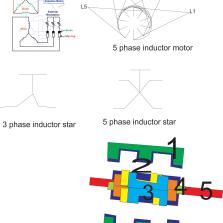 The working of 5 phase inductor is design to work in the same principle. Similar to the working of three phase induction motor, five phase induction motor works on the application of Faraday'slaw and Lorentz force on conductor. When five phase ac supply is given to the stator winding which are spatially and time displaced by displaced by 72°the rotating magnetic field is produce which rotates at synchronous speed. When short circuited rotor (squirrel cage) is placed in rotating magnetic field an EMF is induced in the rotor conductor due to electromagnetic induction. Due to this EMF, current starts flowing in the rotor conductor and sets up its own magnetic field. Due to interaction of these two magnetic fields, a torque is produced and conductor tends to move. A hole cut at the center of the drive shaft inside the rotor. An insulator is installed in the hole to act as a regulator, to control excess magnetic field. The component of the system is coated with oil film plate to reduce over heating (the idea was gotten from umbrella usage).

Data availability: Data sharing not applicable to this article as no datasets were generated or analysed during the current study.
ScienceOpen disciplines: Engineering,Mechanical engineering