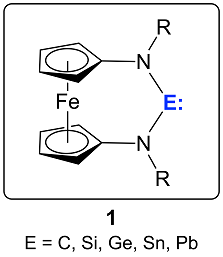 ScienceOpen
Bookmark
There is no author summary for this article yet. Authors can add summaries to their articles on ScienceOpen to make them more accessible to a non-specialist audience.
Soon after the spectacular isolation of the first stable N-heterocyclic carbene (NHC) by Arduengo et al. in 1991, NHCs attained the status of ordinary compounds with very useful, but essentially unspectacular, chemical behavior. In contrast to this widespread judgement, ferrocene-based NHCs of type 1 (E = C) exhibit a highly unexpected reactivity, which makes them suitable for the activation of fundamentally important small molecules like CO or \(NH_{3}\) and supports the burgeoning concept of ‘main-group elements as transition metals’. We expect similarly unusual properties for the heavier homologues of carbon(II) compounds of type 1, in particular for the corresponding silylenes (E = Si). In comparison to carbene chemistry, silylene chemistry is less developed. First results concerning the synthesis and reactivity of ferrocene-based N-heterocyclic silylenes and also germylenes, stannylenes and plumbylenes (E = Ge, Sn, Pb) will be presented.