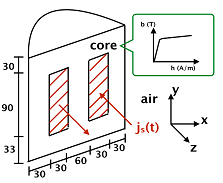 In the model order reduction community, linear systems have been widely studied and reduced thanks to various techniques. Proper Orthogonal Decomposition (POD) in particular has been very successful, and has recently been gaining popularity in computational electromagnetics. However, the efficiency of POD degrades considerably for nonlinear problems, in particular for nonlinear magnetodynamic models---necessary for designing most of today's electrical machines and drives. We propose to investigate an algorithm which first applies the POD to construct reduced order models of nonlinear magnetodynamic problems for discrete sets of values of the input parameters. Then, for a new set of values of the input parameters, a nonlinear interpolation on manifolds is performed to determine the reduced basis. This interpolation method is based on the theory previously studied for aerodynamic problems. The goal here is not to speed up single shot calculations, but to be able to determine efficiently reduced models for nonlinear problems based on previous offline computations. As a simple application, we apply the procedure to a nonlinear inductor-core system, solved using a classical finite element method. In order to gauge the interest of manifold interpolation we compare the proposed approach to the direct use of a precomputed reduced basis, as well as with the use of standard Lagrange interpolation.