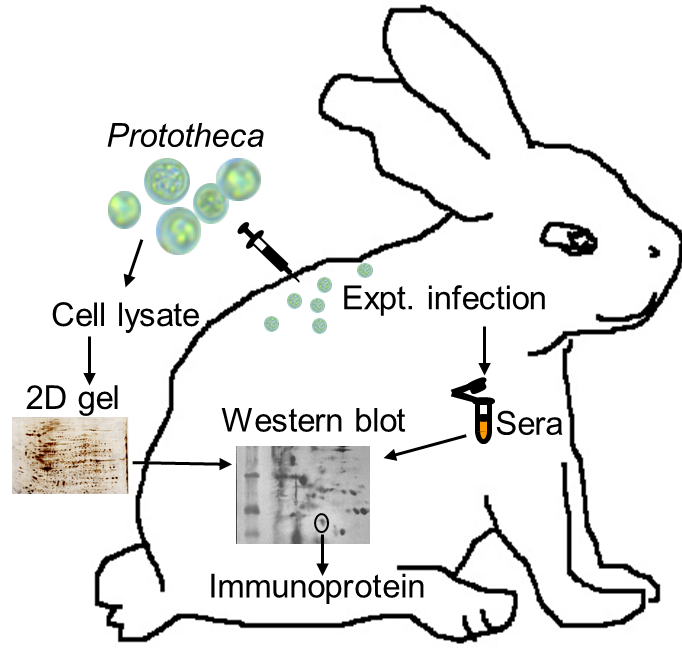 ScienceOpen
Bookmark
There is no author summary for this article yet. Authors can add summaries to their articles on ScienceOpen to make them more accessible to a non-specialist audience.
Introduction Microalgae of the genus Prototheca (P.) are non-green unicellular algae closely related to Chlorella spp. Prototheca spp. are associated with rare but severe infections in vertebrates, often referred to as Protothecosis. Among cattle, it is associated with a resistant form of bovine mastitis and hence is of economic importance. The main infectious agent appears to be P. zopfii genotype 2 (GT 2), whereas genotype 1 is classified as non-virulent. In addition, P. blaschkeae is also isolated from cattle affected by bovine mastitis. It is of interest to investigate specific antigenic proteins present in GT2 that might be responsible for its infectivity. Materials and methods Whole cell protein extracts from P. zopfii GT1, GT2 and P. blaschkeae were separated using two-dimensional gel electrophoresis (2D-PAGE) followed by Western Blotting using serum from rabbits experimentally challenged with GT2. 91 spots (23 of P. zopfii GT2, 33 of GT1, and 35 of P. blaschkeae) were excised, digested with trypsin and identified using MALDI-TOF mass spectrometry. Results In the absence of Prototheca genome information, about 68% (61 proteins) of investigated proteins were identified. They were mainly involved in energy metabolism, transcription, cellular transport, and cell signaling. Three proteins (transcription elongation factor 1-alpha, malate dehydrogenase, and heat shock protein 70) appear to be common antigens among P. zopfii GT1, GT2 and P. blaschkeae. Conclusion Enhanced metabolism might be attributed to the survival of the algae in the macrophages during the early stage of infection. Further investigations using serum from naturally infected hosts such as cows or dogs might provide additional clues on the mechanism of this algal infection.