The "other" earwig: Hemimerus sp. and its cephalic adaptions towards commensalism 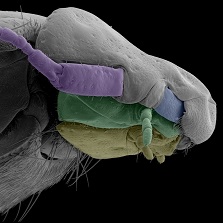 ScienceOpen
Bookmark
There is no author summary for this article yet. Authors can add summaries to their articles on ScienceOpen to make them more accessible to a non-specialist audience.
All earwigs (Dermaptera) are very similar in their habitus. They are characterized by their flat and elongate bodies with typical pincers at the abdominal apex. The only distinct exceptions are the commensal Hemimeridae. They live in the fur of giant murid rats, where they feed on skin scales, secretions and fungi. This family differs morphologically so strongly from other earwigs, that they were even considered a separate order. However, recent molecular and morphological studies suggest that the highly specialized Hemimeridae are deeply nested in Dermaptera. To study adaptive features related to the commensal lifestyle, we compared the head of Hemimerus sp. with cephalic structures of Forficula auricularia and Diplatys sp. Hemimerus shows several distinct modifications apparently linked with life in and on fur: the head capsule, which is oval in dorsal view in the remaining earwigs, is triangular and strongly compressed. The antennae are held close to the sides of the head. The compound eyes, which are obviously of minor importance in dense fur, are completely reduced, along with the optic lobes. As an adaptation to the specific diet, which requires no grinding, the mandibles are positioned further apart and lack a mola. Additionally, the maxillary and labial palps are smaller than in free-living earwigs. Potential apomorphies of the dermapteran head include the 3-partite stipes, the prominent scapo-pedicellar joint and the paired distal sclerites on the praementum.