Mapping the osmotic component of salinity tolerance in Arabidopsis thaliana 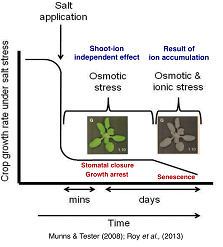 ScienceOpen
Bookmark
There is no author summary for this article yet. Authors can add summaries to their articles on ScienceOpen to make them more accessible to a non-specialist audience.
Salt stress significantly reduces plant growth, as well as crop yield, and is becoming an increasing problem with the growing presence of salt-affected and arid land. To enhance and better understand the mechanisms of salinity tolerance, we propose to dissect the early responses to salinity. This early response phase is termed the osmotic component of salinity tolerance (sensu Munns & Tester, 2008), which has been further described as the shoot ion independent tolerance (Roy et al., 2014). High throughput and non-destructive imaging techniques have been utilised to discover the genes affecting the osmotic component of salinity tolerance in the model plant Arabidopsis thaliana. Non-invasive phenotyping can capture multiple growth measurements and other phenotypic parameters upon imposition of salt stress, enabling quantification of “osmotic tolerance”. Doing this for members of association mapping populations enables the identification of quantitative trait loci (QTL), and ultimately genes, underlying the shoot ion independent tolerance, thus, providing insights into the controlling processes. By testing the high-throughput phenotyping system at Photon Systems Instruments (PSI), we have been able to optimise the GWAS experimental design and select the most promising parameters that best illustrate the salt effect in the early shoot ion independent phase. The acquired data from these experiments will be presented, including general observations on the shoot ion independent tolerance index and other contributing factors such as changes in leaf colour, rosette temperature and non-photochemical quenching. The analysis of these datasets has facilitated for us to design a GWAS experiment using 350 Arabidopsis accessions that will be evaluated in terms of their shoot ion independent response.