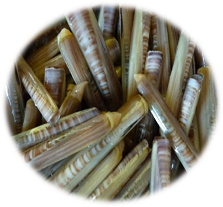 ScienceOpen
Bookmark
There is no author summary for this article yet. Authors can add summaries to their articles on ScienceOpen to make them more accessible to a non-specialist audience.
Solenidae are deep-burrowing bivalves that inhabit shallow waters to a depth of 100 m in tropical, sub-tropical, and temperate seas worldwide. They are absent from Polar Regions and some oceanic islands such as New Zealand. We mapped and modelled their geographic distribution using environmental data. The geographic distribution of species in 5° latitudinal bands showed a distinct bimodal pattern, and exceptionally high regional endemicity. The Indo-Pacific area exhibited the greatest species richness while the Philippines had a higher number of species (13) than any other biogeographic province in the whole of the Indo-Malayan realm. The most important environmental factors in determining Solenidae environment suitability were distance to land, depth, productivity, wave height, and sea surface temperature.