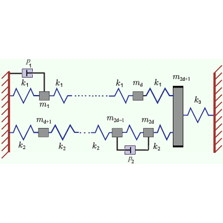 We propose an approach for approximating the full-order transfer function $H(s;p)=C(s E -A(p))^{-1}B$ with a reduced-order model that retains the structure of parametric dependence and (typically) offers uniformly high fidelity across the full parameter range. Remarkably, the proposed reduction process removes the need for parameter sampling and thus does not depend on identifying particular parameter values of interest. Our approach is based on the classic Sherman-Morrison-Woodbury formula and allows us to construct a parameterized reduced order model from transfer functions of four subsystems that do not depend on parameters, allowing one to apply well-established model reduction techniques for non-parametric systems. The overall process is well suited for computationally efficient parameter optimization and the study of important system properties.

One of the main applications of our approach is for damping optimization: we consider a vibrational system described by

where the mass matrix, $M$, and stiffness matrix, $K$, are real, symmetric positive-definite matrices of order $n$. Here, $q(t)$ is a vector of displacements and rotations, while \(w(t) \) and $z(t) $ represent, respectively, the inputs (typically viewed as potentially disruptive) and outputs of the system. Damping in the structure is modeled as viscous damping determined by $C_{int} + C_{ext}$ where $C_{int}$ and $C_{ext}$ represent contributions from internal and external damping, respectively. Information regarding damper geometry and positioning as well as the corresponding damping viscosities are encoded in $C_{ext}= U\diag{(p_1, p_2, \ldots, p_k)} U^T$ where $U \in \mathbb{R}^{n\times k}$ determines the placement and geometry of the external dampers.

The main problem is to determine the best damping matrix that is able to minimize influence of the disturbances, $w$, on the output of the system $z$. We use a minimization criteria based on the $\mathcal{H}_2$ system norm. In realistic settings, damping optimization is a very demanding problem. We find that the parametric model reduction approach described here offers a new tool with significant advantages for the efficient optimization of damping in such problems.