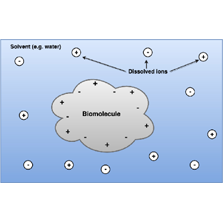 The Poisson-Boltzmann equation (PBE) is a nonlinear elliptic parametrized partial differential equation that is ubiquitous in biomolecular modeling. It determines a dimensionless electrostatic potential around a biomolecule immersed in an ionic solution \cite{Chen}. For a monovalent electrolyte (i.e. a symmetric 1:1 ionic solution) it is given by

\[\label{PBE} -\vec{\nabla}.(\epsilon(x)\vec{\nabla}u(x)) + \bar{\kappa}^2(x) \sinh(u(x)) = \frac{4\pi e^2}{k_B T}\sum_{i=1}^{N_m}z_i\delta(x-x_i) \quad \textrm{in} \quad \Omega \in \mathbb{R}^3, \]
\[\label{eq:Dirichlet} u(x) = g(x) \quad \textrm{on} \quad \partial{\Omega}, \]
where $\epsilon(x)$ and $\bar{k}^2(x)$ are discontinuous functions at the interface between the charged biomolecule and the solvent, respectively. $\delta(x-x_i)$ is the Dirac delta distribution at point $x_i$. In this study, we treat the PBE as an interface problem by employing the recently developed range-separated tensor format as a solution decomposition technique \cite{BKK_RS:16}. This is aimed at separating efficiently the singular part of the solution, which is associated with $\delta(x-x_i)$, from the regular (or smooth) part. It avoids building numerical approximations to the highly singular part because its analytical solution, in the form of $u_{\textrm{s}}(x) = \alpha \sum_{i=1}^{Nm}z_i/ \lvert x-x_i \rvert$ exists, hence increasing the overall accuracy of the PBE solution.\\

On the other hand, numerical computation of \eqref{PBE} yields a high-fidelity full order model (FOM) with dimension of $\mathcal{O}(10^5)$ $\sim$ $\mathcal{O}(10^6)$, which is computationally expensive to solve on modern computer architectures for parameters with varying values, for example, the ionic strength, $I \in \bar{k}^2(x)$. Reduced basis methods are able to circumvent this issue by constructing a highly accurate yet small-sized reduced order model (ROM) which inherits all of the parametric properties of the original FOM \cite{morRozHP08}. This greatly reduces the computational complexity of the system, thereby enabling fast simulations in a many-query context. We show numerical results where the RBM reduces the model order by a factor of approximately $350,000\(and computational time by \)7,000\(at an accuracy of \)\mathcal{O}(10^{-8})$. This shows the potential of the RBM to be incorporated in the available software packages, for example, the adaptive Poisson-Boltzmann software (APBS).