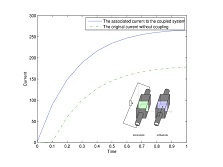 ScienceOpen
Bookmark
There is no author summary for this article yet. Authors can add summaries to their articles on ScienceOpen to make them more accessible to a non-specialist audience.
Modeling of the electro-magnetic disturbances between electrical elements which are sitting in an electro-magnetic system, the so-called crosstalk phenomenon, may lead to partial differential-algebraic equations. In this poster, we propose a new modeling approach to describe the crosstalk phenomenon for electro-magnetic systems, and in particular, in electrical circuits by bilateral coupling of two sets of equations. The first set is a set of differential-algebraic equations (DAEs), the so-called circuit equations i.e. the Kirchhoff current law as well as constitutive laws of the inductors and the voltage sources and presented in our model in the framework of modified nodal analysis. The second set is the set of partial differential equations (PDEs), the so-called non-stationary Maxwell equations, modeling the induction of the electro-magnteic disturbances. Considering these two sets of equations as input-output subsystems, the bilateral coupling approach connects the output of one subsystem to the input of the other subsystem and conversely, via coupling and re-coupling relations. These relations, which are in principle physical constitutive laws, are introduced in our model by suitable operator structures. The coupling of these two sets of equations leads to a set of partial differential-algebraic equations as the model equations for the crosstalk phenomenon in electrical circuits.