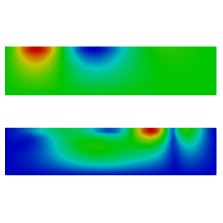 In this work we will focus on recent advances in reduced order modelling for parametrized problems in computational fluid dynamics, with a special attention to the case of inverse problems, such as optimal flow control problems and data assimilation, and multi-physics applications.

Among the former, we will discuss applications arising in environmental marine sciences and engineering, namely a pollutant control in the Gulf of Trieste, Italy and a solution tracking governed by quasi-geostrophic equations describing North Atlantic Ocean dynamic. Similar methodologies will also be employed in problems related to the modeling of the cardiovascular system.

Among the latter, we will present further recent developments on reduction of fluid-structure interaction problems, based on our earlier work. Reduced order approaches for parametric optimal flow control will also be applied in combination with domain decomposition in view of further applications in multi-physics.