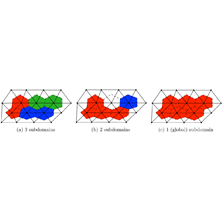 We present a method for model reduction of finite-volume models that guarantees the resulting reduced-order model is conservative, thereby preserving the structure intrinsic to finite-volume discretizations [1]. The proposed reduced-order models associate with optimization problems characterized by (1) a minimum-residual objective function and (2) nonlinear equality constraints that explicitly enforce conservation over subdomains. Conservative Galerkin projection arises from formulating this optimization problem at the time-continuous level, while conservative least- squares Petrov–Galerkin (LSPG) projection associates with a time-discrete formulation. We note that other recent works have also considered ROMs that associate with constrained optimization problems [3, 2], although none are conservative.

We equip these approaches with hyper-reduction techniques in the case of nonlinear flux and source terms, and also provide approaches for handling infeasibility. In addition, we perform analyses that include deriving conditions under which conservative Galerkin and conservative LSPG are equivalent, as well as deriving a posteriori error bounds.

On a parameterized quasi-1D Euler equation problem, the proposed method not only conserves mass, momentum, and energy globally, but also has significantly lower state-space errors than nonconservative reduced-order models such as standard Galerkin and LSPG projection.