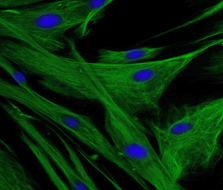 ScienceOpen
Bookmark
There is no author summary for this article yet. Authors can add summaries to their articles on ScienceOpen to make them more accessible to a non-specialist audience.
Background In the past years, ultraviolet-B (UVB)-induced morphological changes in cultured fibroblasts have been systematically studied in relation with photoprotective strategies. The present study was aimed at providing a comprehensive characterization of a human dermal fibroblast cell line, HDFa, in terms of: (i) morphological and phenotypical aspects, and (ii) mitochondrial function and bioenergetics. Methods Morphology of HDFa line was assessed by light microscopy and flow cytometry was used for the evaluation of the the following surface markers: CD34, CD45, CD90, CD73, CD44, CD29, CD117, CD105, CD109, CD26, IL-10R, HLA-DR and TGF-βRIII. Cell monolayers were fixed and stained for CD105, CD117, Ki67, Vimentin, α-smooth muscle actin, Caldesmon, Cytokeratin, and smooth muscle myosin by immunofluorescence. Mitochondrial bioenergetics was measured by using Seahorse Bioscience XF24 extracellular flux analyzer. Different number of cells were seeded in order to obtain the optimal seeding density needed to identify a measurable OCR (oxygen consumption rate) and ECAR (extracellular acidification rate). The following protocol for mitochondrial function assay was tested at 37°C: Basal respiration followed by sequential injections of Oligomycin, FCCP, and Antimycin A (BOFA). Parameters of mitochondrial respiratory function (basal OCR, maximal respiratory capacity, ATP production, and proton leak) together with those of glycolysis (glycolytic flux, glycolytic capacity, and glycolytic reserve), respectively were measured. After each BOFA assay, cells were lysed to quantify total protein by Bradford assay. Results HDFa cells showed elongated flattened form, were adherent and rapidly expanded in culture. HDFa cells were positive for CD90, CD73, CD26, and CD29 at flowcytometry, whereas imunofluorescence microscopy revealed that the cell line was positive for CD105, Ki67, and Vimentin. The optimal mitochondrial and glycolytic flux parameters were reported at 20.000 cells/well, resulting that this seeding density will be used in our further experiments. Conclusions Characterization of HDFa cell line was performed in order to further report on their changes in response to different protocols of UVB exposure in the presence vs. the absence of protective phytochemicals. Research supported by the doctoral fellowship POSDRU/159 /1.5/S/ 136893.