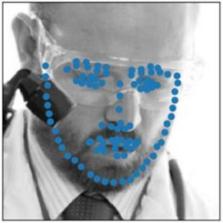 The article presents biometric systems from three different standpoints. Technological standpoint, where the focus is laid on biometric system usage by the general public. Explaining basic terms and difficulties using various biometric characteristics. It also shortly describes how recognition works in several biometric characteristics (fingerprint, face, iris, and signature). After that is the legal standpoint, which is focused mainly on European Union law, where the often-mentioned GDPR is discussed, this basic legal regulation places a significantly higher standard than the previous legislation on the processing of biometric data as a particular category of personal data. Lastly, the article shows a sociological standpoint. In that part, different attitudes towards biometric technologies are discussed within the world population and different groups of the Czech Republic population. In the latest survey done by the authors in 2020 was found that age, and education play a vital role in the knowledge about biometric systems.

The Technology Agency of the Czech Republic TL02000134
Data availability: The datasets generated during and/or analysed during the current study are available from the corresponding author on reasonable request.
ScienceOpen disciplines: Sociology,Computer vision & Pattern recognition,Public law
Keywords: law,biometrics,social groups