THE HITS AND MISSES OF RUSSIA-AFRICA TIE: A COMPARATIVE ANALYSIS OF SOCIO-ECONOMIC PARTICIPATION 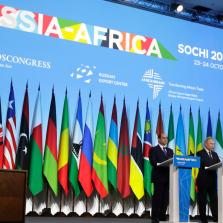 Africa is the second-largest and most populous continent globally; in the last decade has witnessed Russian return under Putin’s administration. In this regard, Russia has changed its point of view over Africa to achieve its aim of being one of the global superpowers. Russia today is wealthier and more stable than it was at any point during the 1990s. The research methodology sterns from the review and analysis of several strands of literature. The paper focused on examining the foreign policies of Russia for African states after the new millennium epoch that promoted its swift activities. The paper also fills the existing literature gap in the Russian foreign policy towards African states after the year 2000. It evaluates both countries’ Russian-African strengths, weaknesses, opportunities, and threats in socio-economic engagements. It also reveals that the activities of Russia in Africa gained more ground on the dysfunctional inability of African countries to integrate within normative situations. Lastly, the work recommends unity and African socialism among African countries.