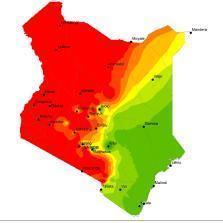 Changed from phrasing from past tense to present tense where applicable.

This paper provides guidance on the use of existing wind data in Kenya with the Eurocodes despite the absence of the local national annexes. The determination of wind loads in the structural design of buildings according to the Eurocode Standard KS EN 1991-1-4:2005 in Kenya is challenging because of the lack of the Kenya National Annex. The design code commonly used in Kenya is CP3-Chapter V-2:1972 that uses the three-second gust duration. This gust duration results in higher magnitudes of wind loads that end up making the structures unnecessarily robust and uneconomical. Using the Eurocodes has the promise of achieving more economical designs because it uses the 10-minute gust duration. The 10-minute gust duration results in typically lower magnitudes of wind loads than the three-second gust duration for the same wind speed. Kenya adopted the Eurocodes in September 2012 but has not yet developed its national annexes opting instead to use the UK National Annexes. The UK National Annexes are applicable to Kenya in some scenarios but not in others such as wind loading. The lack of the Kenya National Annexes has led to difficulties in the adoption of the Eurocodes. This paper outlines a procedure in which the existing wind data given in three-second gusts could be converted to 10-minute wind speeds. Once converted, the method described in the UK National Annex could then be followed selectively to determine the wind load on a structure. Lastly, the paper recommends that wind data collected from 1977 to 2021 by the Kenya Meteorological Department be incorporated to the development of the wind map for the Kenya National Annex to KS EN 1991-1-4:2005

Self None
Data availability: All data generated or analysed during this study are included in this published article (and its supplementary information files).
ScienceOpen disciplines: Civil engineering
Keywords: Eurocodes,Wind,Kenya,Economic,Design,Gusts,CP3