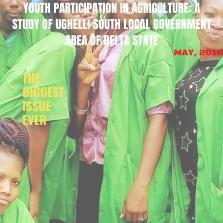 The Research work was carried out to investigate the proximate analysis of assessing youth participating in agriculture: Ughelli South Local Government Area, Delta State. Thus, ten (10) communities were selected using descriptive non probability research design. A sample of 200 respondents was selected from the ten (10) Local Government Areas of Delta state gotten from six (6) Kingdoms that made up Ughelli South. The information from the respondents were analysed and interpreted using tabular method percentage of R/N=100/1 in part A of personal information of the respondent while part B was analysed using mean (X) with a cut off mean point of 3.00 items in each research question were accepted when it is 3.00 and above mean point and rejected when it is below cut off mean point of 3.00. The major finding is that 70% of farmers in Ughelli South were of the age group into subsistence farming.

Data availability: All data generated or analysed during this study are included in this published article (and its supplementary information files).
ScienceOpen disciplines: Education,Agriculture