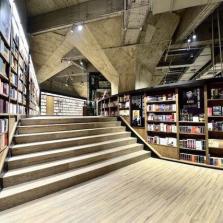 From the perspective of the three bookstores of Fangsuo Commune, SISYPHE Bookstore and Tales on Moon Lane, there are three ways to increase traffic:

Get traffic through active operations. For example, celebrity speeches, writers' signings, or art exhibitions, such as those events held at Fangsuo Commune and Tales on Moon Lane every year to attract customers.

Make a large store size and expand the space volume. The British Booksellers Association has also mentioned that window display is the most powerful marketing tool for bookstore marketing activities, and it can convey the ideas and basic ideas of the bookstore owner. For example, the Fangshang Commune store covers an area of 4,000 square meters and is nine meters high. The SISYPHE Bookstore also uses the exquisite store design to attract customers into the store. Because the budget is not large, Tales on Moon Lane will also put more energy into the store window display.

Therefore, the “New Type” bookstore model can achieve commercial success in a short period of time, which must be that it breaks a small group of people targeted by traditional bookstores and covers a larger audience. By building core existing customers into their core strategies and cultivating and transforming potential customers, the traffic community can also contribute to a steady stream of consumption. The "new type" bookstore model has a huge space for future development and is also of positive significance for realizing the revitalization of physical bookstores.

Since the economic globalization was proposed in the 1980s, the links between the world have become more and more close, followed by cultural globalization. With the emergence of the digital economy, people's lifestyles have also changed. At the same time, post-modern consumerism centered on aesthetic and symbolic consumption began to emerge. The paper is divided into five parts to explore whether the physical bookstore can achieve revival. The first section includes research on post-modern consumerism to illustrate its core, chaeacteristics and audience. Under the premise of this, do general research has been done on Fangsuo Commune Bookstore as a representative of the "new type" bookstore, and in-depth analysis of Fangsuo Commune in Taikoo Li Chengdu has been made. In the end, based on the comparison between Fangsuo Commune and other physical bookstores, it is possible that the "new type" bookstore model can realize the revival of physical bookstores.

Data availability: All data generated or analysed during this study are included in this published article (and its supplementary information files).
ScienceOpen disciplines: Arts
Keywords: "New Type" Bookstore,Fangsuo Commune,Renaissance,Chengdu,Post-modern Consumerism

This is a research article on physical bookstores, which deeply analyzes the possibility of bookstore development in the future by comparing the form of bookstores in China and other countries.