The quest towards understanding the molecular pathogenesis of triplet repeat disorders: Huntingtons Disease and Fragile X-Associated Tremor and Ataxia Syndrome 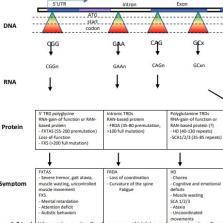 Trinucleotide repeat disorders (TRDs) make up a group of neurological inherited diseases mediated by unstable protein expansions. Polyglutamine expansion lead to diseases such as Huntington’s Disease (HD), while polyglycine expansions lead to diseases such as Fragile-X Associated Tremor and Ataxia Syndrome (FXTAS). The normal huntingtin gene contains 6-34 CAG repeats; however, upon a threshold effect that exceeds 36 repeats, HD becomes fully penetrant and promotes degeneration of neuronal populations. In contrast, FXTAS arises from polyglycine repeats between 22-200. FXTAS carriers experience severe tremor, ataxia and brain atrophy. Here, we analyze the various ways mutant huntingtin and FMR1 mRNA aggregates induce intracellular dysfunction in HD and FXTAS, specifically in the context of impaired neuronal processes and protein-protein interactions. The identification of these molecular processes offers potential targets for drug intervention that can lead to the development of innovative therapies to treat HD and FXTAS neuropathogenesis.

Trinucleotide repeat disorders encompass a group of neurological diseases driven by unstable repeat expansions. Huntingtons disease (HD) is characterized by chorea and brain atrophy. The normal huntingtin protein contains 6-34 CAG repeats; however, upon a threshold effect of >36 repeats, the huntingtin protein acquires toxic mechanisms that are harmful to the cell. Fragile X-Associated Tremor and Ataxia (FXTAS) is characterized by tremor, ataxia and neuronal loss. The normal FMR1 gene contains 5-45 CGG repeats; however, upon a premutation CGG expansion of 55-200, FXTAS arises. A pathological hallmark of these disorders includes aggregate formation within the brain; suggestive of impaired protein and mRNA function. Furthermore, important molecules have been found to be sequestered into these aggregates withdrawing them from their normal roles. In this review, the ways mutant huntingtin and FMR1 mRNA aggregates induce intracellular dysfunction in HD and FXTAS is analyzed, specifically in the context of impaired neuronal processes and protein-protein interactions. Analysis revealed that huntingtin and FMR1 mRNA are involved in the regulation of multiple cellular pathways; and whose impaired function results in a detrimental domino-effect that is destructive to the cell. The understanding of these molecular processes hopes to identify potential targets towards the treatment of HD and FXTAS.