Selling sex: what determines rates and popularity?\\ An analysis of 11.5 thousand online profiles 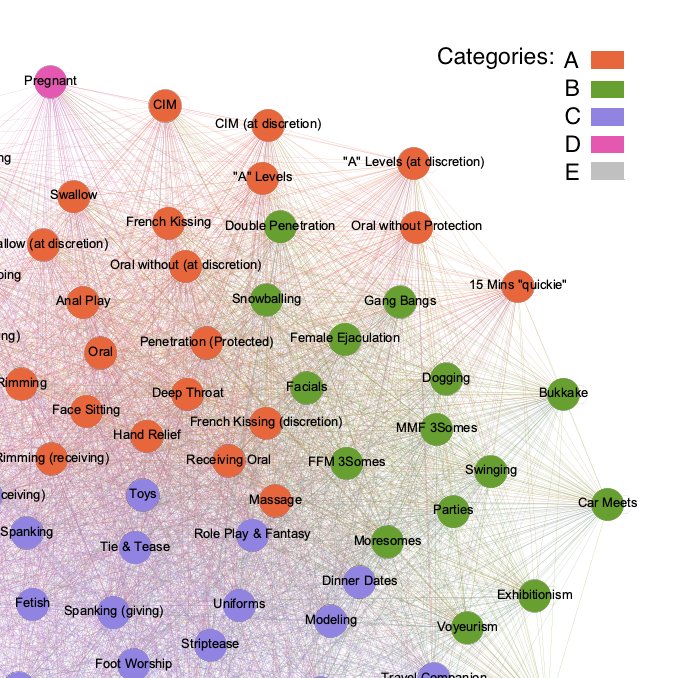 Sex work, or the exchange of sexual services for money or goods, is ubiquitous across eras and cultures. However, the practice of selling sex is often hidden due to stigma and the varying legal status of sex work. Online platforms that sex workers use to advertise services have become an increasingly important tool in studying a market that is largely hidden. Although prior literature has primarily shed light on sex work from a public health or policy perspective (focusing largely on female sex workers), there are few studies that empirically research patterns of service provision in online sex work. Little research has been done on understanding pricing and popularity in the market for commercial sex work. This study investigates the determinants of pricing and popularity in the market for commercial sexual services online by using data from the largest UK network of online sexual services, a platform that is the "industry-standard" for sex workers. While the size of these influences vary across genders, nationality, age, and services provided are shown to be primary drivers of rates and popularity in sex work.

THE DYNAMICS OF SELLER REPUTATION: EVIDENCE FROM EBAY

Jocelyn Elmes,  Kundai Nhongo,  Helen Ward … (2014)
Background.  Higher prices for unprotected sex threaten the high levels of condom use that contributed to the decline in Zimbabwe's human immunodeficiency virus (HIV) epidemic. To improve understanding of financial pressures competing against safer sex, we explore factors associated with the price of commercial sex in rural eastern Zimbabwe. Methods.  We collected and analyzed cross-sectional data on 311 women, recruited during October–December 2010, who reported that they received payment for their most-recent or second-most-recent sex acts in the past year. Zero-inflated negative binomial models with robust standard errors clustered on female sex worker (FSW) were used to explore social and behavioral determinants of price. Results.  The median price of sex was $10 (interquartile range [IQR], $5–$20) per night and $10 (IQR, $5–$15) per act. Amounts paid in cash and commodities did not differ significantly. At the most-recent sex act, more-educated FSWs received 30%–74% higher payments. Client requests for condom use significantly predicted protected sex (P < .01), but clients paid on average 42.9% more for unprotected sex. Conclusions.  Within a work environment where clients' preferences determine condom use, FSWs effectively use their individual capital to negotiate the terms of condom use. Strengthening FSWs' preferences for protected sex could help maintain high levels of condom use.

The SAGE Handbook of Social Media