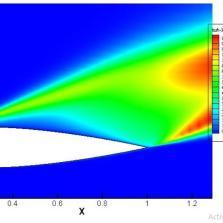 To improve the design and performance of an airfoil, its aerodynamic properties must be studied properly. The turbulence kinetic energy of two symmetric airfoils (NACA 0018 and NACA 0012) was investigated in this study at two separate Reynolds numbers of 300,000 and 700,000. This computational simulation work presented in this paper yields some interesting results. The distribution of turbulence kinetic energy across both airfoils at various angles of attack and under two different airstream velocities is illustrated in this paper. Due to flow separation, there has been a significant amount of turbulence observed after the stall angle. The final results show that the NACA 0018 airfoil produces significantly more turbulence than the NACA 0012 airfoil. And it happens because as the thickness of the airfoil increases, there is more friction with the air particle. In the second comparison, in terms of Reynolds number or airstream velocity, higher velocity produces more turbulence, as shown by the red zone in this paper. As turbulence is always expected to be as low as possible in aircraft, it is recommended to use NACA 0012 airfoil in aircraft applications and NACA 0018 airfoil usage in horizontal or vertical axis wind turbine applications where turbulence is of less importance.