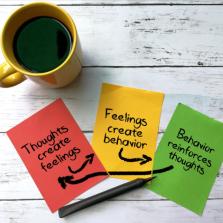 In this modern world, cognitive behavioral therapy is increasingly becoming a popular psychotherapeutic method amongst other talking therapies. CBT is a short term psychological technique which can help to modify patient’s attitude. It should be considered that CBT is nothing but learning and doing. So it could be impossible without patient’s cooperation. It could be argued that CBT has been identified as a remarkable treatment for considerable numbers of mental diseases specially mood disorders such as depression and anxiety. There are a wide range of arguments for and against Cognitive behavioral therapy. In this framework, firstly, CBT and its principles will be completely introduced. Secondly, application of CBT will be mentioned. Thirdly, some criticism will be expressed. Finally, in this paper, some collusion will be drawn.

Data availability: All data generated or analysed during this study are included in this published article (and its supplementary information files).
ScienceOpen disciplines: Social & Behavioral Sciences
Keywords: Cognitive Behavioral Therapy