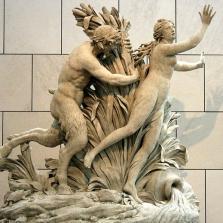 Statistical analysis requires special care be taken to avoid inferring signals when in fact there is only noise. The well-attested to psychological phenomenon of apophenia, which results seeing patterns in unconnected things, is a consequence of human cognition being strongly inclined towards making causal inferences. We can infer from this that it is generally safer to assume that the noise we heard in the bush was an approaching predator rather than the wind, despite the latter being the more likely cause. When trying to understand the significance of deviations from an expected observation, such as a bell curve, regression to the mean or, in this case, Zipf's law, it is usually advisable to counteract that tendency to see meaning with a sceptical assumption that the violation of the status is due to noise, absent evidence to the contrary.

Dealing with a work of art, though, presents an entirely different scenario. In this case we not only presented with the fact of a pouncing lion, but also with a carefully curated symbolic representation of signals of that attack. In this case we have a musical score for Syrinx prepared (for the most part) by Claude Debussy with the deliberate intent to produce a certain effect. While we should still be cautious in not using this fact to support claims that some note "means" something knowable, we can be at least be reasonably certain that Debussy meant to write that note and not some other.

This inversion of the usual logic of causal inference allows to investigate whether, and to what extent, signals produced by a statistical lens such as Zipfian distribution reflect interpretative inferences made independently of that tool. Additionally, because the score to Syrinx is a complete representation as a score, we can ask which expected interpretative consequences are reflected by the Zipfian device.

In this way, we can use the artwork (Debussy's Syrinx), to study and explore the behavior of a statistical phenomenon (Zipf's law) when presented with well defined, intentionally produced signals. This does not mean to say that just because we saw some signal in Syrinx, that we can deduce the same cause to be present, just as lion attacks typically occur after a rustle in the bushes does not mean that every rustle in the bushes is followed by a lion attack. But since a rustling in the bushes is much more frequent than lion attacks, it may be more helpful to observe that attacks are frequently preceded by rustlings, than to observe that rustlings are rarely followed by attacks.

In the more general sense, then, this paper explores how we can use art to make sense of the very tools with which understand the world in a way that is complementary and supportive of the usual methods of science, where causal inference is the goal rather than the starting point.

Background in music analysis. Music analysis often relies on pre-formed concepts such as “binary form”, key centers, or rhythmic tropes to provide templates for comparison between works. To the extent that such tools are based primarily on semantic level considerations, they can present obstacles to translation between different 4E domains of embodied, embedded, extended, and enactive cognition. Power law analysis, representing a context neutral information theoretic approach which is amenable to task specific weighting, can help bridge the gap.

Background in applied mathematics. In this paper we investigate how deviations from the near universal phenomenon of logarithmic perception correspond to psychologically tractable interpretations of a musical score. We show that variations in the slope of a straight-line log-log regression and its residuals, together with variation in structural features produced by varying counting methods and levels of analysis correspond to academic and expert assessments in various ways. We then show how wavelet analysis can be used to smooth over level of analysis problems.

Aims. We seek to explore how violations of simple power law descriptions (Zipf’s law) relate to structural features of Claude Debussy’s Syrinx for solo flute as in the form of a variety of analyses and performances.

Main contribution. Power laws are an important implicit feature of musical notation through such characteristics such as octave equivalence and beat hierarchies, but are rarely explicitly employed as higher-level analytical tools directly, despite the fact that the scale-invariance property and empirical observation suggests that they can be useful at that level too. The simple historical reason is that generating such descriptions, while conceptually straightforward, is quite computationally intensive. Now that computation is readily available it has become possible to extend power law descriptions into these higher levels of analysis with relative ease. Our contribution is to explore some general techniques that can be expanded upon and refined as a broader research program with substantial interdisciplinary implications for the study of perception and cognition generally, since these phenomena obey similar laws.

Implications. The present study is correlational in nature, so the direct implications are limited for either music analysis, which provides the interpretive data, or power law representations, which follows well-established practices. However, having established that a set of relatively approachable mathematical operations can readily account for key music-theoretical structural features, the door is opened to a systematic application of the principles involved. This provides an opportunity to state music theories in ways that are precise, falsifiable and directly relatable to modes of description employed in other sciences. Furthermore, because these procedures have broad relevance to many domains outside of music theory, it allows for insights gained from studying musical structure to be applied directly to other, ostensibly unrelated problems.