Failed MitraClip procedure with pull out of the anterior leaflet

MitraClip is an attractive and less invasive alternative to mitral valve surgery in serve mitral regurgitation in patients with moderate or severe risk for operation. It has been described to be effective and safe in functional as well as in degenerative mitral regurgitation. We report a case of MitraClip procedure with the pull out of the anterior leaflet during the intervention. The patient underwent cardiopulmonary support and surgical intervention with a good outcome. With this report, we illustrated the etiology and management of this complication.

Mitral regurgitation in dilated cardiomyopathy is often a functional reason of either ischaemic or idiopathic origin. Furthermore, hybrid forms with functional as well as degenerative mitral regurgitation are described. Persistent severe mitral regurgitation leads to left ventricular and atrial chamber remodeling with poor clinical outcome [1]. In most patients, effective surgical repair of the mitral valve can cause decreasing in the left ventricular volume overload and can lead to reverse left ventricular and left atrial remodeling [2]. Mitral valve repair to reduce the mitral regurgitation by creating a double-orifice was first performed by Alfrieri [3]. Based on this surgical technique, endovascular mitral repair with the use of a clip has been developed [4]. Percutaneous mitral valve repair in edge-to-edge procedure with the MitraClip device has been shown to be associated with good clinical outcomes in patients with high risk for surgery [5]. Furthermore, it demonstrated to be superiorly safe compared with surgical mitral valve repair with similar improvement in clinical outcomes [6].

We describe a case of a 68-year-old man with severe mitral regurgitation and dilated cardiomyopathy with failed MitraClip procedure. The medical history included inflammatory cardiomyopathy with initial highly reduced ejection fraction (30%) by minor pronounced borderline myocarditis and normal coronary angiogram. With initiating of medical treatment, the left ventricle function was enhanced to 45% but was still persisting atrial fibrillation with unsuccessful cardioversion by severe mitral regurgitation with eccentric lateral jet. Furthermore, he had impaired renal function and a moderately combined lung disease (Euroscore 22%). In cause of dyspnea by minimal stress, we decided to proceed with the procedure of MitraClip. 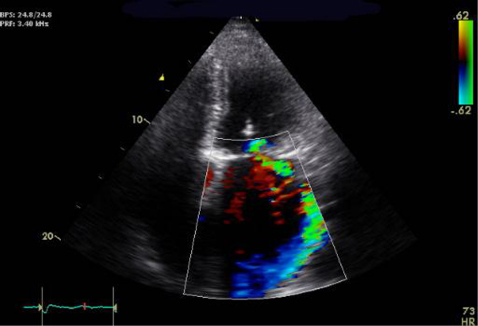 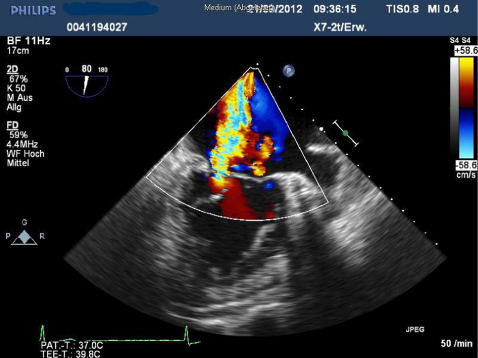 The standard procedure was performed with percutaneous femoral venous transseptal access. The clip was aligned above the mitral valve, approved with 3D-echocardiogram, before grasping and coapting the leaflets. The grasp of the leaflets was easy and unspectacular; with the second try of grasping, we demonstrated a reduction of the mitral regurgitation from severe to minimal, with remaining jet lateral of the clip. The verification of the leaflet insertion confirmed enough stuff of the posterior leaflet as well as of the anterior leaflet in the clip. By waiting 15–20 minutes after grasping and furthermore constant well-fitting clip, we decided a two-clip procedure to reduce the remaining lateral jet. After preparation of the second device transesophageal echocardiogram, it revealed a pull out of the anterior leaflet. The clip was only attached on the posterior leaflet. Out of the clip on the anterior side, we see approximately 8 mm stuff pull out of the anterior leaflet (Figure 3, Supplementary Video 1). 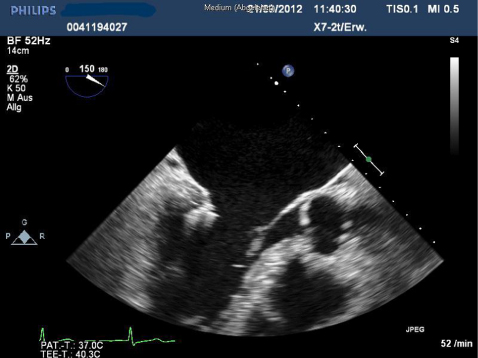 The procedure was discontinued and the anesthesia ended. The patient was awake and hemodynamic steady. Two days later, he received a standard median sternotomy with mitral valve replacement of a biological valve Labcor 31 mm (Figure 4). The postoperative process was prolonged in case of acute renal failure, sick sinus syndrome with the necessity of a permanent pacemaker, and infectious complications including a serve clostridia colitis. After six weeks of hospital stay, we could discharge the patient in rehabilitation. 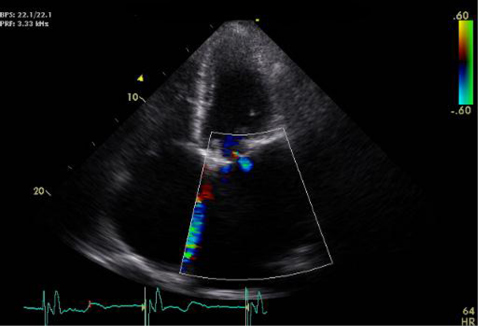 Mitral clipping is an attractive alternative treatment of severe mitral regurgitation compared with cardiac surgery in patients with moderate and high risk for surgery. Described before is the dissolve of the posterior or anterior leaflet after insufficient leaflet insertion. This was the first report which shows the pull out of the anterior leaflet during the procedure. Beside the functional mitral regurgitation in cause of dilatation of the annulus, the MitraClip procedure is also described as effective and safe in degenerative mitral regurgitation. In spite of these observations, it might be necessary to have a careful analysis of the structural integrity of the leaflets in order to guard this situation, particularly in case of the missing possibility of mitral valve repair after MitraClip procedure as the first instance.

The authors declare no competing interests.

© 2014 S. Rutschow et al. This work has been published open access under Creative Commons Attribution License CC BY 4.0, which permits unrestricted use, distribution, and reproduction in any medium, provided the original work is properly cited. Conditions, terms of use and publishing policy can be found at www.scienceopen.com.

In the manuscript “Failed MitraClip procedure with pull out of the anterior leaflet ” dr. Rutschow and colleagues report on a patient with severe MR treated with Mitraclip in whom a detachment of the clip from the AML occurred a few minutes after the grasping. The procedure was then stopped and the patient underwent a surgical MV operation.

The case is interesting as it offers a view of the possible complications during Mitraclip procedure. However it shows some limitations that need to be underlined.

The authors state that “The transesophageal echocardiogram conformed severe mitral regurgitation with eccentric lateral jet, posing a combination of degenerative and functional mitral regurgitation” I do not agree with this, in a dilated cardiomyopathy an eccentric jet is found as a consequence of asymmetric tethering. Unless a clear prolapse is demonstrated, this is always a type 3b MR mechanism.

The screening TEE exam seems quite poor. No data are reported on MV leaflets characteristics and length, and no data are available of annular dimensions. A Mitraclip device is only 16 mm long when its arms are open, therefore in dilated ventricles extreme dilation of MV annulus has to be taken into account as a limiting factor. How long was the AP MV diameter in this case? What about the tethering? Was it symmetric? How deep was the coaptation point?

Concerning the clip detachment, in my clinical experience this is not a reason for putting the patient on surgical schedule. A second clip can be implanted with good result, I fully agree with dr. Rodrigo Estevez-Loureiro’s comment.

In our experience even a detached clip can contribute to reduce the leaflet prolapse in type 2 MR.

Rodrigo Estevez-Loureiro wrote:
This is an interesting paper reporting an intra-procedural partial clip detachment from the AML. The case is well presented and it seems to me that it was ideal for MitraClip. I would like to stress the importance of confirming that adequate leaflet insertion is mandatory before releasing the clip. However, I disagree with authors that the procedure should be stopped at this point. Usually the placement of a second or third clip can stabilize the first one and achieve an optimal result. Readers must be aware that the presence of partial clip detachment is not an indication for conversion to stander surgery, that, as reported in the case, is associated with high morbidity.
2014-12-24 11:35 UTC
+1