Didelphys uterus results from an incomplete fusion of mullerian ducts and corresponds to the class III of mullerian abnormalities of the American Fertility Society. We describe the case of a spontaneous twin pregnancy developed in each cavity of a didelphys uterus. At 29 weeks of gestation and 6 days, the patient had preterm rupture of membranes in the right horn. She went into spontaneous labor and delivered vaginally the first “right” twin. Delivery was complicated with post-partum hemorrhage on uterine atonia treated with a Bakri balloon. She was tocolyzed to pursue the fetal lung maturity of the second twin. She had a rupture of the second membranes at 30 weeks and 3 days and had a preterm vaginal delivery at 32 weeks and 1 day of the second twin. Twin pregnancy in both horns of a uterus is extremely rare, about 1 in 1,000,000. Pregnancies on congenital abnormalities of the paramesonephric duct present frequently poor obstetrical outcomes and many complications. There are no guidelines about the follow-up of these high-risk patients or the mode of delivery.

Didelphys uterus results from a complete failure of fusion of the two mullerian ducts in the female genital tract formation during the embryonic development. There is then two hemi-uterus, each one with a uterine cavity, two cervices, and a vaginal septum. Twin pregnancies with a fetus in each cavity are extremely rare, approximately 1 in 1,000,000. We describe the case of a spontaneous twin pregnancy developed in each cavity of a didelphys uterus, with a premature vaginal delivery, and a delayed interval delivery of 16 days between the two twins.

Diagnosis of an evolutive dichorionic diamniotic twin pregnancy with a fetus in each horn of the uterus was made on ultrasound at 8-week gestation (Figure 1). By convention, we named TA the fetus in the right horn, and TB the fetus in the left horn. This situation being of high risk of premature delivery, the patient was monthly followed by a clinical and sonographic evaluation. At 25 weeks, fetal lung maturation was undertaken by an injection of 12 mg of betamethasone repeated 24 hours later. 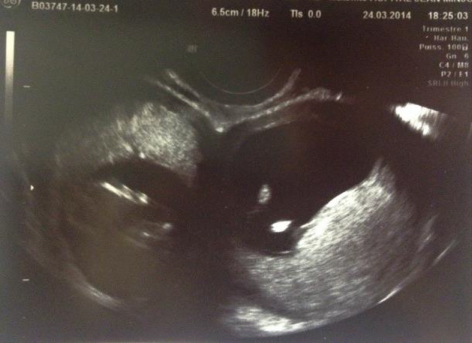 She had a premature rupture of the membranes on TA at 29 weeks and 6 days.

On digital cervical examination the right cervix was posterior, short, soft, admitting one finger, and the right fetus cephalic presentation was high and mobile (Bishop score = 3). The left cervix was the same as the right one. Speculum examination showed clear fluid going out the right cervix. Fetal heart rate of both fetus was normal. Biological parameters were normal without inflammation. Infection was searched with a urine and vaginal secretions examination. No tocolysis was made. The patient had antimicrobial prophylaxis by 1 g of ceftriaxone and a second cure of betamethasone. Labor started spontaneously the same day and ended with the spontaneous vaginal delivery of TA on vertex presentation, a boy weighing 1690 g, who was transferred to pediatric intensive care unit due to respiratory distress. After the placenta's delivery which was complete, she presented a primary post-partum hemorrhage evaluated at 1550 cc for which she had a right uterine revision, an inspection of the vagina, cervix, and perineum, and finally bleeding was stopped by a Bakri balloon inflated up to 300 cc. The latter was removed the day after. After verification of TB's good vitality and the mother's haemodynamic stability, it was decided to do tocolysis by atosiban for 48 hours. Urine and vaginal analysis was positive for Enterobacter cloacae and the patient was treated by cefepime (1 g twice a day intravenous for 8 days).

During the hospital stay, the patient had transfusion of four packs of red blood cells because of an anemia at 9 g/dL and had two intravenous iron injections. Later, she had a preterm rupture of the membranes on TB at 30 weeks and 3 days. At 32 weeks and 1 day, labor started spontaneously and she had a vaginal delivery assisted by spatulas of a boy born in vertex presentation, weighing 2040 g transferred to neonatal care. The post-partum was uneventful and the patient was discharged on the fourth day post-partum.

Both children's evolution was favorable, and they went home respectively at 42 and 31 days post-partum.

Didelphys uterus corresponds to the class III of mullerian abnormalities from the American Fertility Society classification from 1988 [1] (Figure 2). It results from a complete failure of fusion on the median line of the two paramesonephric ducts or mullerian ducts during the embryonic development. It is frequently associated with an imperforated obstructed hemivagina on the side of a renal anomaly. The incidence of all those abnormalities is around 4.3% in the general population, and didelphys uterus represents 8.4% of them [2]. 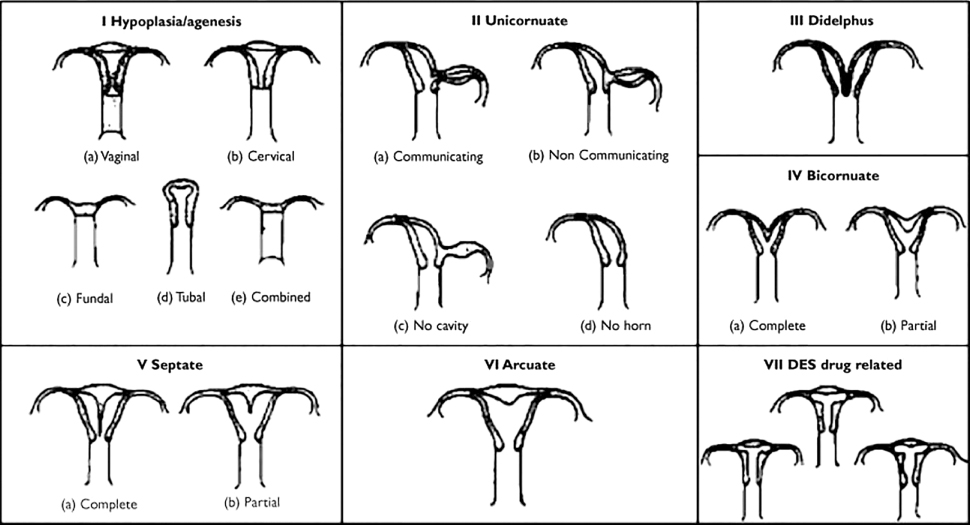 These female genital tract anomalies do not seem to be associated with a lower fertility [3] (except for agenesis) but generate poor obstetrical outcomes. Thus, in a review of literature, Grimbizis [2] showed for uterus didelphys a spontaneous abortion rate of 32.9%, a premature delivery rate of 28.9%, a term delivery rate of 36.2%, and finally a live birth rate around 56.6%. In addition to these complications, there is a higher rate of malpresentation, placental abruption and retained placenta, intrauterine growth restriction, operative delivery [4]. These complications are explained by three mechanisms: decreased muscle mass, abnormal uterine blood flow, and cervical insufficiency.

Twin pregnancies with a fetus in each cavity of a didelphys uterus are extremely rare, approximately 1 in 1,000,000 [5]. We sorted out in the literature 8 twin pregnancy cases which occurred on bicornis unicornis uterus with a fetus in each cavity, whose outcomes were favorable for both twins (Table 1). In two cases pregnancy was induced, one by simple induction of ovulation [6], the other by induction combined with transcervical insemination in each uterine cavity [7]. There was a simultaneous cesarean section on both hemi-uterus in five cases [6, 8–11], one vaginal delayed delivery of 5 days [5], one case with a cesarean section on the first twin at 25 weeks, followed by a vaginal delivery on the second twin at 35 weeks [7], and finally a case with a vaginal delivery for the first twin then a cesarean section for the second because of fetal heart rate anomalies [12].

Table 1.
Literature review of simultaneous twin pregnancies in each cavity of a didelphys uterus with favorable outcomes.

Spontaneous labor of only one hemi-uterus and delayed delivery of the two twins corroborate with the hypothesis that the initiation of labor is a local phenomenon, with a role of the fetus and placenta, and not a general phenomenon [5].

The pregnancy continuation after the birth of the first twin in the case of a double uterus allows the delayed delivery of the second twin and so increases his chances by reducing the impact of prematurity.

In our case, the 2-week interval allowed us to do a complete lung maturation for the second twin and come through the very premature birth period.

There are neither recommendations for monitoring modalities nor for the delivery mode.

Monthly follow-up, similar to every dichorionic diamniotic twin pregnancy, seems to be correct so as to assess fetal growth and to screen for complications. Because of the high risk of prematurity, systematic lung maturation by a corticoid injection appears to be necessary once the vitality is reached.

While the first reports seemed to promote cesarean sections, vaginal deliveries are nowadays increasingly practiced because of their lower maternal complication rate. Pregnancy conservation after first twin delivery in that particular situation allows delayed delivery of the second twin and facilitates its management by decreasing the impact of prematurity.

The authors declare no competing interests.

© 2015 Levy et al. This work has been published open access under Creative Commons Attribution License CC BY 4.0, which permits unrestricted use, distribution, and reproduction in any medium, provided the original work is properly cited. Conditions, terms of use and publishing policy can be found at www.scienceopen.com.

Level of validity: The article is well argued but the English level is very low and it would need corrections.

Level of completeness: The authors reference the appropriate scholarly context. The authors provide or cite enough information to follow their findings or argumentation. They cite enough relevant publications in the field.

o Level of comprehensibility: Is the language correct and easy to understand for an academic in the field? Are the figures well displayed and captions properly described? Is the article systematically and logically organized?

Level of comprehensibility: The language needs corrections by a native English speaker. The figures are well displayed and properly described. Correcting the english sentences construction, it would be enough systematically and logically organized.

PREVIOUS COMMENT CONTAINS SOME MISTAKES DUE TO COPY AND PAST ACTION

This article deals with an interesting topic, although it does not provide important insights in the argument, It can be useful as shared experience on a quite rare clinical situation. Unfortunately, in the introduction and in the case report, the authors write in an incorrect English with frequent errors in grammar and sentence construction. Improper use of words/literary translation instead of correct medical terms/ errors in english sentences ( eg. boy, to do, use of saxon genitive.. ) are frequent. After the authors will have provided corrections with a native English speaker's help, the paper will be certainly more fluent and comprehensible.