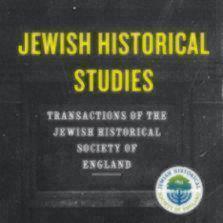 It is sometimes through seeing the world upside down that we can understand the complexity of things the right way up. This could come across no more clearly than in one of the many pieces of Yiddish popular culture that Vivi Lachs cites in her trailblazing new book, Whitechapel Noise. Lachs recounts the content of the poem “A pekl nevies” (A bundle of prophecies), published in the Bloffer by the acclaimed humorist Avreml (Avrom Margolin). It imagines what would happen to Yiddish London if the Messiah came: “The chief rabbi would stand down, and questions and rulings would be taken to the secular Ahad Ha’am. [Yankev-Meyer] Zalkind would become editor of the Anglo-Jewish newspaper the Jewish World. Rocker would leave anarchist ideology and become an inspector of kosher meat. Shmuel Alman (the classical composer and conductor) would take lessons from Shtoyb (the popular composer and conductor). The main Yiddish papers, the Idisher ekspres and the Idisher zhurnal, would switch to English, and the new editor would be Churchill. And so on” (p. 205). This charivari not only reflects an upended world order but also allows us to appreciate the diversity of the Jewish immigrant community in Britain at the time and its exuberance and powers of self-analysis. While historians have focused in detail on various encounters of late nineteenth-century British Jewry with the maelstrom of the historical processes and phenomena, movements, and ideologies it confronted, Lachs draws attention to one of its generally neglected skills, its ability to travesty them. By going to the music hall and the theatres, the radical press, and the humoristic magazines, Lachs lets us see the burlesque of a community which hitherto we have tended to see only the right way up (in the conventional sense of the word).

Lachs’s book is at the forefront of a renaissance of British Jewish cultural history. Following Michael Berkowitz’s recent book on British Jewry and photography and David Dee’s on sport, and coming out in the same year as Gil Toffell’s history of British Jewry and film, Lachs’s volume offers an exemplary template for future efforts of this kind, not least because of her extensive engagement with neglected Yiddish-language sources. Building on the pioneering work of Leonard Prager, her study fills a glaring gap (David Mazower’s Yiddish Theatre in London being a notable exception in this regard). Lachs relies on an extensive Yiddish-language archive to narrate Jewish cultural history in this period not from the “Anglo-Jewish” or British perspective but from the vantage of the Jewish immigrants themselves and those who actively strove to influence them in their own vernacular.

The first chapters of the book are dedicated to the broader history of its two central topics – the early Yiddish radicals and anarchists and the Yiddish music halls and those who performed there. The individuals who stand out from these two groups are Morris Winchevsky, a radical litterateur, and the aforementioned Avrom Margolin, an able satirist who wrote under the name Avreml. These chapters present an adept summary of the research undertaken in these fields both from a specific British Jewish perspective and from the vantage of British history more generally, and thus provide an ideal springboard for the remainder of the book.

In it, Lachs offers a thematically arranged description drawing on close readings of material ranging from various Yiddish songs published in Winchevsky’s Arbeter Fraynd and other radical newspapers or satirical magazines, such as Avreml’s Bloffer, to those which formed the repertoire in the music halls. While this may seem an unduly broad spectrum of material, Lachs compellingly underscores its commonalities. These songs point to various blind spots and neglected characteristics of the community which the traditional Anglo-Jewish leadership was rather keen to keep in the dark.

To be sure, Winchevsky’s poems are often more serious in tone, but Lachs excels at drawing out the historical and social contexts and significance of music-hall songs and socialist anthems in equal measure. Dealing with important political controversies of the period and issues such as socialist activism and the critique of religion, Lachs explores how song reflected, and intervened in, some of the community’s key preoccupations. There is great patience and sophisticated research on show here. Her ability carefully to reconstruct the double entendres and hidden meanings of the songs allows Lachs to contextualize them with enormous depth.

Lachs does not avoid controversial topics like prostitution and the sex trade. Equally welcome is her interest in courtship and sexual relations, a topic which has received little scholarly attention. In this context, the music halls and theatres emerge as spaces facilitating interaction between the genders in a non-traditional setting while the repertoire performed there, in turn, skewed those very relations to comical effect.

Two aspects of this book deserve special commendation. The first is a welcome focus on the transnational. None too surprisingly, given that many of the actors and performers in question moved around between the relevant centres of Jewish settlement, these poems and songs were frequently written in London and then performed all over the Jewish world. Lachs is thus able to anchor her analyses of British Jewish culture within a wider, international Jewish story. This is all the more welcome given that (as Lachs notes) no comparable study on New York Jewry currently exists. The poem “London bay nakht” is a case in point. It may seem very British, criticizing as it does the insufficient support given to new immigrants by British society and the extreme poverty potentially precipitated by this indifference. But, as Lachs points out, it is in fact based on an earlier Russian poem whose meaning had been changed to make it more applicable to the situation in London. The song based on this poem achieved popularity on both sides of the Atlantic. In the American version, the “londoner komite layt” became “di nyuyoriker 8te strit layt”, and this version was subsequently also published in London. In Whitechapel Noise, Lachs alerts us to the enormous fluidity of the identities and cultures both shaping and shaped by the transnational interaction and currents between the key centres, in which Jews from Eastern European (had) settled.

Secondly, given her background in ethnomusicology, Lachs is able to home in not only on literary but also on musical issues. This is most fascinating when she discusses the interaction between the texts and the tunes to which they were set. In the song “Viktorye Park”, for example, Arn Nager populated the London park which had become increasingly popular with Jewish immigrants with comical Jewish characters, giving it the atmosphere of the East European Jewish heym. The tune of the song, however, is similar to that of “London Bridge is falling down”. As Lachs notes: “Counterpointing the English feel with the image of homeland and the image of the East End, it invites the listener to combine these experiences of location” (p. 83 ). Lachs’s readings are alert to the ways in which contrasting texts and tunes can influence a song’s meaning.

Especially in light of the excellence and depth of her analysis, one occasionally wishes Lachs had extended the remit of her study. Key moments in the development of Zionism in the UK and internationally transpired in the East End: Herzl’s impassioned speech at the Jewish Working Men’s Club to a hall full of Jewish immigrants in July 1896, just after the publication of Der Judenstaat, is a case in point, and the prominent Yiddish journalist Jacob Hodess (1885–1961) wrote about the enormous influence Zionism exerted on him and other young Jewish immigrants during this period. The impact of Zionism on the culture of the Jews who had come to Britain from Eastern Europe generally seems to have attracted less attention than that of Jewish socialism. Lachs makes no claim, of course, of moving beyond the London repertoire and does a great job of placing it in a broader, transnational context. Inevitably, the reader is left with a keen desire to hear about Yiddish music halls elsewhere in the British Isles. Additional information on the size and composition of the music hall audiences and the circulation of the newspapers in question could further enrich the analysis. Winchevsky claimed that his songs, once published, were heard in all the workshops of the East End. We need not question his claim to want to know more about the significance and impact of the institutions Lachs discusses for and on the community as a whole.

Lachs has produced a detailed and illuminating account of Yiddish song in London. Instead of shying away from the diversity of the community’s output she has embraced it and by doing so enormously enriched our understanding of what East End Jews thought, sung along to, and laughed at in this period.