Consilient Discrepancy: Porosity and Atmosphere in Cinema and Architecture 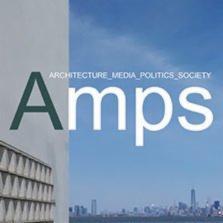 Cinema constitutes a way of looking at the world, at a world – its aspect, its appearance; but it also presents how that world looks, its prospect – by the prospective glance it throws back toward us. The “look” of a film – its mood, ambiance or atmosphere – eclipses formal and aesthetics registers. It is fundamentally world-forming, and therefore both cosmogonic and ethical: cosmogonic because it produces a world in the midst of, and as, the temporality that devolves through its passage; and ethical because the world it brings about is an inhabited world, a conjugation of people and place that constructs particular ways of being-there-together.

The premise here is that atmosphere, ambiance and mood have never been vague categories for cinema and need not be for architecture: rather, that they are in fact producible through deliberate organizational strategies – kinematic and narrative in film, tectonic and material in architecture – according to what might be called “consilient discrepancy” – the coexistence of disseveral systems in unaligned multiplicity that, while never fusing, resonate to produce emergent conditions. Cinema offers architecture an accessible and instructive instance of such consilient discrepancy, because, in it, atmosphere is more fully captured and the conditions that create it more evidently analyzable. To that extent, cinema provides architecture with comparative grounds for engaging with atmosphere through a properly tectonic practice that can potentially enrich the design and experience of architecture.

Consilient discrepancy is evident across multiple registers in film. It can function at the level of narrative, space and time and thus puts into question verisimilitude, causality, situational and durational veracity. An example of this is the constitutive disjunctions of Jean-Luc Godard’s jump cut montage where sampled film sequences, film and photographic stills, texts and citations, ambient sound, spoken word and music, build into complex assemblages of sense ( Histoire(s) du Cinema, 1998). It is evident in Nicholas Roeg’s multiple, simultaneous temporalities where past and future events interpenetrate and mutually condition the narrative present ( Bad Timing, 1980). Similarly, we can find it in Michelangelo Antonioni’s sequence shots that traverse multiple timeframes across the same space – a technique that enables past and present to communicate and amplify the affective, foundational value of the unseen and off-frame ( The Passenger, 1975). Another example would be David Lynch’s labyrinthine existential settings, constituted of interminable slippages between indeterminable and infinitely potentialized spaces of dreams, imagination, memory and reality ( Mulholland Drive, 2001). Likewise, we could cite Michael Hanake’s persistent displacement of causality and verisimilitude through ambiguous narrative viewpoints ( Caché, 2005), and Roy Andersson’s radically liminal settings and characters whose lives constitute larval pre- and/or post-human states of existence ( A Pigeon Sat on a Branch Reflecting on Existence, 2014).

This paper will foreground two foundational characteristics of atmosphere in cinema, as evident in the works just cited, and explore their applicability to architecture. The first characteristic is the consilient discrepancy outlined here by way of introduction, and the second, related characteristic, is a spatiality of porosity and occlusion. The provisional aim of comparing cinema and architecture according to this tectonic logic is to go beyond typical ways of understanding cinema’s formal engagement with architecture. For this purpose, a detailed analysis of Béla Tarr’s film Werckmeister Harmonies (2000) will serve as a case study for how the medium of cinema generates atmosphere, ambiance and mood through visual language. This will be followed by a similarly detailed consideration of concomitant qualities created in two recent works by the architects Flores Prats, the Mills Museum and Casal Balaguer. Functioning as exemplars of how cinematic qualities can be made manifest in architecture, these precedents will further substantiate the cinematic–architectonic proposition ventured in this paper.

Agencies of the Frame: Tectonic Strategies in Cinema and Architecture

The University of Sydney