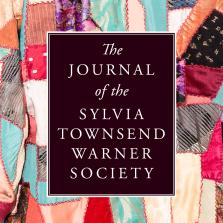 In reviewing The Akeing Heart. Passionate Attachments and their Aftermath for the Journal of the Sylvia Townsend Warner Society 2013 I identified a number of shortcomings, some of which were sufficiently serious to damage the book considerably as a basis for further research. Nevertheless, in conclusion I argued that ‘in an ideal world The Akeing Heart would be picked up by a publisher, given the benefit of a firm editorial hand and issued in a revised edition’. Well, sometimes you just get lucky, and fortune, in the guise of Handheld Press, has smiled on The Akeing Heart, making the ideal actual.

Some of the changes made by the editor are relatively minor. The slightly woolly subtitle, ‘Passionate Attachments and their Aftermath’, has been replaced by the crisply descriptive ‘Letters between Sylvia Townsend Warner, Valentine Ackland and Elizabeth Wade White’, for example. The number of photographs has been very slightly reduced but those remaining have been reproduced in a larger size, increasing legibility. Perhaps not terribly important in itself, this change nevertheless adds interest to the text and clarifies the reason for including the photographs in the first place. The editor has also eliminated the many headings in bold that Peter Judd included in the 2013 edition. These added little to the text and were a constant visual distraction. Cumulatively these minor changes result in a much cleaner, uncluttered page enabling the reader to engage more directly with the writing itself.

However, some (admittedly minor) problems have escaped correction. Judd’s repeated reference to Janet Machen as Warner’s niece falls into this category. There is very little excuse for this, given that Judd himself correctly identifies Janet as the daughter of Warner’s maternal aunt, Purefoy Machen, making them cousins, not aunt and niece. Despite this, he repeatedly refers to Janet as a niece, even, in one instance, immediately prior to a letter from Elizabeth Wade White which refers to ‘S’s young cousin, Janet Machen’ (see pp. 136 and 137). Am I just being pedantic here? I think not, since carelessness in something that could so easily be corrected (rightly or wrongly) can suggest carelessness in other matters too.

In the 2013 edition the endnotes were something of a mess because the identifying numbers had dropped out of the text, rendering the notes themselves very difficult to use. This has been corrected, and much additional information about public figures previously included within square brackets in the text has been moved to the endnotes, improving the readability of the text. Again, one or two things have escaped notice: in some instances people referred to in the text are noted on the second rather than first reference (Anna-Louise Strong, for example, appears on p. 84, but is not referenced until the second mention in the text on p. 90) or, in the case of David Garnett (p. 18), not endnoted at all. It is true that Warner enthusiasts will be well aware of who Garnett is, but the book surely has appeal to a wider readership than that. Similarly, Warner’s reference to ‘George and Elizabeth’ (p. 198) might have been given a note identifying King George VI and his wife Queen Elizabeth since, at this distance of time, it cannot safely be assumed that all readers will be able to work this out for themselves. However, it is always easy to quibble about endnotes and, on the whole, the balance between too few and too many is about right, such minor matters notwithstanding. As the endnotes were probably my biggest concern with the first edition, I am very happy to see that they have been dealt with so efficiently by the editor for the second edition.

The central content of The Akeing Heart has not changed from the 2013 edition, with the editor keeping the same selection of letters and adhering to the original policy of including only complete letters rather than making cuts in them. The major change to the content is therefore the very welcome excision of the lengthy quotations from the letters that Judd included in his own commentary, even in cases where he gave the whole letter immediately afterwards. The end result of this editorial decision is to banish the sense of déjà vu which was so tedious in the first edition. The letters, though themselves unchanged, are thereby given a much sharper focus and a greater force, allowing the quality of the writing (especially that of Warner and Wade White) to show through. Nor is it just the letters that are given a greater clarity by the removal of the lengthy quotations: Judd’s own writing is also displayed to greater advantage.

Judd draws The Akeing Heart and the narratives of those four women to a close in an epilogue that is almost unchanged from the first edition: there has been only very minor rearrangement of material in a couple of places. It is a neat device which avoids a car crash ending at the end of the affair between Valentine Ackland and Elizabeth Wade White. It also allows Judd to show that they continued to correspond and had infrequent meetings which, while not secret, nevertheless excluded their partners. Although Judd is careful not to apportion blame, the destructive power of the affair comes through strongly here and he notes its continuing corrosive effect, especially on Evelyn Holahan, who became an alcoholic. Sylvia Townsend Warner ‘never overcame the power of that hurt’ (p. 392) and was unable to relinquish her anger until after Ackland’s death in 1969 when she could recreate their lives together in the letters and narratives abridged as I’ll Stand by You (Pimlico, 1998).

I ended my review of the first edition by asking if, in the light of its extensive problems, it was worth buying, and I’ll end this review by asking if it is worth owners of the first edition buying the second. Just as I answered ‘yes’ in the 2013 review so I answer ‘yes’ now, for although the content is largely unchanged, the well-judged and sensitive editorial interventions have created an entirely different reading experience: the distractions are gone and the women’s voices can be clearly heard.

Helen Sutherland teaches English Literature and History of Art in adult education at the University of Glasgow. She was the editor of the Sylvia Townsend Warner Journal from 2009 to 2014.

This is an Open Access article distributed under the terms of the Creative Commons Attribution License (CC-BY) 4.0 https://creativecommons.org/licenses/by/4.0/, which permits unrestricted use, distribution and reproduction in any medium, provided the original author and source are credited • DOI: https://doi.org/10.14324/111.444.stw.2020.16