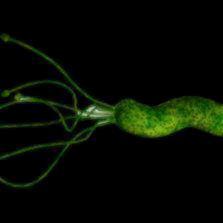 When did Helicobacter first colonise humans? by Barry Marshall

Clues to the answer exist in H. pylori DNA, and its relationships with other gastrointestinal bacteria.

When did humans first acquire Helicobacter?

The majority of articles mentioned in my editorial are included in the collection below. In addition, I cite

When did humans first acquire Helicobacter?

The basis for this question is that all human races, as far as we can tell, are naturally infected with Helicobacter pylori. When H. pylori strains were collected from all over the world and their population structure and phylogenetic relationships determined via the diversity of seven of their housekeeping genes, it was found that the strains had a common ancestor prior to the emergence of humans from Africa (Linz et al. 2007). Humans and H. pylori have remained closely associated ever since. Indeed, the patterns of H. pylori genetic diversity can tell us much about various ancient human migrations (Ghose et al. 2002, Falush et al. 2004, Linz et al. 2007, Moodley et al. 2009). This includes the information that humans and their associated H. pylori spread out of East Africa around 58,000years ago (Linz et al. 2007). This provides a latest possible date for acquisition.

The second interesting piece of evidence is that the large felines (lions, tigers and cheetahs) carry a Helicobacter called Helicobacter acinonychis, which is similar to H. pylori. When the genomes of these organisms are sequenced they appear to be H. pylori with corrupted genes including surface antigen genes. According to Eppinger et al. (2007) in their paper “Who Ate Whom?…”, the degree of divergence across 612 common genes shows that H. acinonychis had a common ancestor with H. pylori approximately 200,000 years ago (range 50,000 to 400,000 years ago). But did humans gain Helicobacter from big cats, or was it the other way around? The high level of fragmentation of coding sequences in the lion strain, including genes for surface and outer membrane proteins and the VacA cytotoxin, indicates that the direction of the host jump was from man to big cats. The premise is that the humans were eaten by lions who acquired the Helicobacter, which then evolved into a modified more benign strain without toxins. This data then pushes back the date of first association even further; it suggests that humans had H. pylori long before they came out of Africa.

Subsequently, focus moved to analysis of the accessory genome to improve our understanding of H. pylori and human evolution. Phylogenetic analysis of the cag pathogenicity island (cagPAI) reveals a similar genealogy to that derived from study of the housekeeping genes (Gressman et al. 2005, Olbermann et al. 2010). This implies that cagPAI has accompanied H. pylori since before human migrations out of Africa. However, unfortunately cagPAI can tell us little about the timing of human acquisition of H. pylori, since the ancestral hpAfrica2 strains (in contrast to other Africa strains and the majority of strains from around the world) do not have the cag pathogenicity island.

Given the focus on Africa as both the origin of modern humans and the association with H. pylori, it was thought study of the continent’s indigenous people might shed more light on the date of acquisition. Evidence from language studies and human mitochondrial DNA indicates that the ancestors of the San indigenous people were the original inhabitants of sub-equatorial Africa. Hence, Moodley et al. (2012) incorporated strains from communities within this group into a more extensive analysis of H. pylori genetic divergence. They found further evidence of similar evolutionary histories for the host and the pathogen. This indicates that H. pylori was probably acquired by humans in a single host jump. Using two different models to develop phylogenies from the strains’ house-keeping genes, and sophisticated calibration methods based on archaeological and molecular calibration points, they dated human acquisition of H. pylori to approximately 100,000 years ago. They also dated the jump to felines at only around 50,000 years ago, very much at the lower end of Eppinger et al.’s estimates.

The next question one might ask then is has Helicobacter infected humans since before our divergence from apes, probably around 7 to 10 million years ago (but see Venn et al. 2014)? To assess this one might look at the gastric microbiology of various ape and monkey species. The first bit of relevant information is that H. pylori is known to colonize rhesus macaques. However, all observed cases are from macaques in research colonies or populations closely associated with humans, so there is no definitive evidence of a natural association (see refs in Moodley et al. 2012). Therefore, one might look at apes with a closer relationship to humans, such as chimpanzees. Moodley et al. (2012) were unable to detect H. pylori by culture or PCR from wild-born chimpanzees from the Great Lakes region of Central-East Africa. However, as the authors concede, that study was problematic. Neither histology or urease tests were performed, so gold standard evidence is absent. Failed culture could have occurred for any number of reasons, and failed PCR could have resulted from sampling and transport conditions. More recently, Flahou et al. (2014) detected several species of Helicobacter by PCR from chimpanzees and gorillas. However, in the vast majority of cases these were Helicobacter species not closely related to H. pylori. Hence, it appears that apes do not commonly carry H. pylori. Nevertheless, they were able to confirm the presence of H. pylori DNA (via PCR with ureAB-specific primers) in the gut of at least one chimpanzee, an animal unhabituated to humans from Guinea-Bissau.

So for the moment this question is unanswered. Several lines of investigation are required to resolve this issue. A carefully done study with histology, urease tests, microbiology and PCR of samples from wild chimpanzees in areas remote from human populations in necessary. Then we will know whether they do or do not harbor H. pylori. If we assume for the present, that the evidence is that our common ancestor with chimpanzees did not have H. pylori, then humans must have acquired H. pylori after they separated from other apes, i.e., when they became land surface dwelling.

Since apes can be artificially infected with H. pylori, we have to assume that humans had to have acquired H. pylori from a source not usually accessed by other apes. What could this be? H. pylori is ancestrally related to Wolinella succinogenes (Vandamme et al. 1991, Baar et al. 2003), which is a rumen organism, so one might look at the guts of ruminant animals in Africa for a source of H. pylori. Alternatively, there may have been a marine source. Several investigators have reported the incidence of Helicobacter cetorum in dolphins and other marine mammals. MLST and full genome sequencing and analysis reveals that H. cetorum resembles H. pylori quite closely (Harper et al. 2002, Kersulyte et al. 2013). Therefore, humans could have acquired H. pylori as they foraged along the coastline of Africa, eating shellfish, fish or perhaps even dolphins from time to time.