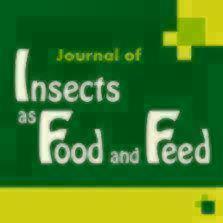 Journal of Insects as Food and Feed

A Wageningen hybrid journal covering the whole chain of insect collecting or rearing to marketing edible insect products for food and feed.

Journal of Insects as Food and Feed

The Journal of Insects as Food and Feed covers edible insects from harvesting in the wild through to industrial scale production. It publishes contributions to understanding the ecology and biology of edible insects and the factors that determine their abundance, the importance of food insects in people’s livelihoods, the value of ethno-entomological knowledge, and the role of technology transfer to assist people to utilise traditional knowledge to improve the value of insect foods in their lives. The journal aims to cover the whole chain of insect collecting or rearing to marketing edible insect products, including the development of sustainable technology, such as automation processes at affordable costs, detection, identification and mitigating of microbial contaminants, development of protocols for quality control, processing methodologies and how they affect digestibility and nutritional composition of insects, and the potential of insects to transform low value organic wastes into high protein products. At the end of the edible insect food or feed chain, marketing issues, consumer acceptance, regulation and legislation pose new research challenges. Food safety and legislation are intimately related. Consumer attitude is strongly dependent on the perceived safety. Microbial safety, toxicity due to chemical contaminants, and allergies are important issues in safety of insects as food and feed. Innovative contributions that address the multitude of aspects relevant for the utilisation of insects in increasing food and feed quality, safety and security are welcomed.

Insects are the most diverse group of animals known, and although there are nearly 2,000 species known to be utilised as food by people, there is a high likelihood that many more species could be utilised. Historically, insects have been eaten by people from many different cultures as part of their normal diet. This tradition has actively continued in several continents where collecting food insects is an important part of people’s livelihoods. Depending upon the geographical location of these different cultures, insects are collected from forests, freshwater ecosystems, deserts, and even agricultural fields. In most cultures, collecting insects as food was governed by traditional methods that encouraged sustainability in the supply of insects. Increasing population pressures, along with associated habitat degradation, has seen adoption of non-sustainable harvesting practices. One of the dangers faced by people globally is the loss of food diversity, and the use of a diverse range of food insects would be a step to alleviate this problem. Many edible insect species are only seasonally available, and there have been some species that have been semi-domesticated to be farmed, either in the wild or in cages. The number of edible insect species that fall into this category is very small, and the potential to farm more species is high and requires further investigation.

One of the advantages of using insects as food and feed is the reduced environmental impacts associated with their production compared to the more conventional stock animals. Insects can be food for both humans and also for some animals used as food, such as fish, poultry and pigs. Edible insects hold considerable potential to replace major feed ingredients that are currently used but have a larger ecological footprint. Environmental impact studies for the production of insect protein are needed to estimate global warming potential, energy use and land use as are overall life cycle assessments. Production of insects for these purposes goes beyond collecting them in the field, and involves farming that can range from small scale enterprises at the individual household or village level through to industrial-scale rearing. One of the challenges is to be able to produce large volumes of insects at a scale that will help reduce the ecological footprint of food production.

Wageningen Academic Publishers is an independent STM publisher in the field of Life Sciences. Located at the heart of one of the world’s most famous food & agriculture research centres, we focus on topics in animal and veterinary sciences, food sciences, environmental sciences and plant sciences. We publish both scientific journals and books (monographs, textbooks and proceedings).