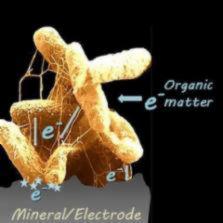 Shewanella: a Versatile respirer that plays a major role in global mineral cycling and in emerging sustainable technologies

A first glance at Shewanella

Shewanella spp. are remarkably versatile respirers. These gram-negative facultative anaerobes can not only switch from aerobic to anaerobic respiration of soluble non-metallic species, but can also reduce metal ions, both soluble and insoluble. By performing extracellular electron transfer (EET) across their outer membranes, they can reduce insoluble minerals, such as iron and magnesium oxides, as well as positively poised electrodes. The latter allows them to serve as living catalysts for organic matter oxidation in microbial fuel cells (MFC) [Watson and Logan 2010], an application designed to purify wastewater and produce electricity simultaneously. In such applications, Shewanella form electrically conductive biofilms at the solid electrode. To perform EET Shewanella utilizes three tools: (i) Outer membrane cytochromes (OMC), a general name for several different multiheme cytochromes displayed on its outer membrane, which receive terminal respiratory electrons from the inner membrane via two other multiheme cytochromes [Bretschger et al. 2007; Shi et al. 2012]. The OMC can transfer electrons directly to insoluble electron acceptors, such as electrodes, but also across the biofilm; (ii) Electrically conductive appendages [El Naggar et al. 2010], dubbed bacterial nanowires, which extend from bacterium to bacterium, throughout the biofilm and connect directly to the solid electron acceptor surface. The structure and function of these appendages are still under investigation and have been the center of considerable controversy. A recent study suggests that they are periplasmic extensions [Pirbadian et al. 2014]. (iii) Secreted flavins, which serve either or both as soluble electron transfer mediators [Marsili et al. 2008] and/or OMC cofactors [Paquete et al. 2014; Okamoto et al. 2014].

Because of its respiratory versatility, Shewanella is of great importance and interest, both for biogeochemical processes such as metal cycling and biomineralization [Fredrickson et al. 2008] and for sustainable technology applications, such as bioremediation, wastewater treatment and resource reclamation [Marshall et al. 2006; Watson and Logan 2010]. These bacteria have only been investigated over the last three decades, meaning that there are still considerable gaps in our understanding of the way they function and their possible applications. However, much knowledge has already been accumulated, and it is the goal of this collection to offer the reader a taste of the different relevant aspects, to serve as a first step for further literature exploration. The open access papers you will find here touch upon respiration, taxis, biofilms, environmental aspects and applied research. However, the collection does not pretend to supply exhaustive information or include all the most prominent papers on the subject. Many important papers, which are not available for open access, had to be omitted. It is my hope that this collection helps readers gain preliminary orientation in the wondrous landscape of Shewanella research, and that in the future more open access publications will join it to make it fuller.