Academicus - In the name of Science 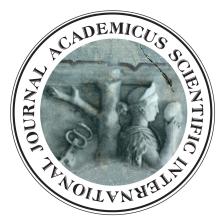 Academicus – International Scientific Journal (Academicus ISJ) is an international scientific journal published in English. Academicus ISJ is a non-profit and open access publication that is published semi-annually and is double-blind peer reviewed. Its print ISSN is 2079-3715 and its electronic ISSN is 2309-1088.
Academicus ISJ is led by an international Editorial Board, consisting of worldwide renowned members of the academic and scientific community, who by their strategic orientation of the journal and the rigid scientific content monitoring they provide, ensure that the works selected for publication meet the highest international scientific and publishing standards. The journal brings together the scientific research of academics within a wide arena of discussion in a way that few other publications of this kind are actually doing.
Conceived as a scientific journal which gives considerable space to research in the social sciences and humanities, and with a direct impact in the social, economic, political, legal, and communication fields, this journal collects works and scientific research developed from the perspective and disciplinary structuring of the social sciences, indexed in the 1XX.XX and 3XX.XX fields of the UDC ( Universal Decimal Classification).
The works published in its issues represent a scientific analysis and approach to research topics with a direct impact on decisions and policy making, as well as contribute in comprehending the great events and dialectics of our societies, expanding the definition of what is regional, starting from the Western Balkans, the Mediterranean countries, Central and Eastern Europe and beyond, with a global view.
The volumes of the Academicus ISJ can be found in hard copy at the Public Library of Vlore City, as well as at the Albanian National Public Library in Tirana, the British Library in London, UK, the ZBW - German National Library, as well as in the most important digital libraries worldwide in open access and by subscription.
In order to preserve the intellectual legacy of its digital content in open access within a long-term storage, all works published in Academicus ISJ have been archived in Portico Repository and with DSpace at an Institutional Repository. To measure the academic impact of its articles according article citations and readings, Academicus ISJ has inserted PlumX, issued and developed by Plum Analytics and Altmetric part of Digital Sciences, for each article.

<p class="first" id="d2266742e62">Every time we mention the word “Science”, an inner debate, which very soon breaks the borders of our mental schemas, comes out, and becomes the dispute topic. Why is science for and what is science for? The hermetical vision of science, which in different ages of human story testified on how easily, we, humans, can create the mechanisms whish suppress our nature, is challenged by the morality dimension of science a well as by the sentinel function and revealing mission science has in leading our lives in the paths of amelioration. So, science for life, and as life is the wholeness of everything and the unification of all diversities, science has no meaning if it is not comprehensive, as a fidelity demonstration of its mission. </p>

10 Years of Academicus International Scientific Journal. The story of contribution in the research in 20 Issues.

A delightful scientific journal which, since its birth in Albania, has quickly learned the ways of the world, bringing Balkan matters and issues abroad, to the East as well as to the West, but also conversely, making known in the Land of Eagles which were the main topics of reflection and study, such as the problems of distant countries and other cultures.

Academicus quickly crossed the sea, making landfall on Italian beaches, where it found not only friends but admirers. From the very beginning, it started looking for broader horizons, never forgetting its native land. It opened its pages, its interests, to several researchers from the most various fields, to numerous research paths. Men and women, old professors and young promising students, have written for this biyearly journal, without any excluding preclusions.

Numerous Social Studies academics have written for it: sociologists, historians, economists, pedagogists, cultural anthropologists and ethnologists, communication experts, scholars who are most interested in the ground researches – a research both run through statistical-quantitative methods and ones more leaning on a qualitative approach – but also countless maîtres à penser, thinkers who have fulfilled a key role in the theoretical construction of the discipline they themselves are teaching or have taught.

I became acquainted with this journal at its birth, as I was and am in its Editorial Board. I have followed with great interest its birth, its first steps: a new venture in a difficult environment, where the risk was to be able to publish its issues for a short amount time and then be forced to shut it down. But that wasn’t Academicus’ itinerary, which kept moving forwards through any circumstance, through the easiest and hardest of times. After all, since its beginning to this very moment, I’ve always been able to rely and hold constructive discussions with my colleague Arta Musaraj, Editor in Chief, who has often involved me in the preparation of specifically-themed issues or in some editorial matter, considering that I, myself, have managed the editorial staff of the quarterly journal «The sociological critique» journal, founded and directed by Franco Ferrarotti.

Some examples of topics I have faced in Academicus? Many:

Albania and the teaching in its schools; or the Political Consensus, Culture, Politics and Power, Disabilities as well as the subject of Kosovo. We’ve written several powerful articles on the Migration Policy, on development and globalization. The journal has dwelled on the Balkans, investigated the matter of Greece’s current situation, but studied faraway African Countries as well. The journal dealt with questions on Kosovo and Macedonia, but also debated Armenia, the genocide it endured. And the beautiful San Francisco, in California.

Similarly, the journal challenged the scientific debate with articles about Max Horkheimer or Max Weber.

In other words, an outstanding journal, which can be read by both modern young people, following it online, and older people who prefer to browse through it appreciating the consistency of paper, editorial care, the cover. One for everyone and everybody, especially those who’ll always appreciate the intrinsic and incomparable professionalism with which all topics are addressed.