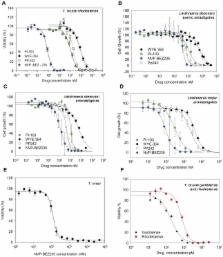 Target repurposing utilizes knowledge of “druggable” targets obtained in one organism and exploits this information to pursue new potential drug targets in other organisms. Here we describe such studies to evaluate whether inhibitors targeting the kinase domain of the mammalian Target of Rapamycin (mTOR) and human phosphoinositide-3-kinases (PI3Ks) show promise against the kinetoplastid parasites Trypanosoma brucei, T. cruzi, Leishmania major, and L. donovani. The genomes of trypanosomatids encode at least 12 proteins belonging to the PI3K protein superfamily, some of which are unique to parasites. Moreover, the shared PI3Ks differ greatly in sequence from those of the human host, thereby providing opportunities for selective inhibition.

We focused on 8 inhibitors targeting mTOR and/or PI3Ks selected from various stages of pre-clinical and clinical development, and tested them against in vitro parasite cultures and in vivo models of infection. Several inhibitors showed micromolar or better efficacy against these organisms in culture. One compound, NVP-BEZ235, displayed sub-nanomolar potency, efficacy against cultured parasites, and an ability to clear parasitemia in an animal model of T. brucei rhodesiense infection.

In our study we describe the potency of established phosphoinositide-3-kinase (PI3K) and mammalian Target of Rapamycin (mTOR) kinase inhibitors against three trypanosomatid parasites: Trypanosoma brucei, T. cruzi, and Leishmania sp., which are the causative agents for African sleeping sickness, Chagas disease, and leishmaniases, respectively. We noted that these parasites and humans express similar kinase enzymes. Since these similar human targets have been pursued by the drug industry for many years in the discovery of cellular growth and proliferation inhibitors, compounds developed as human anti-cancer agents should also have effect on inhibiting growth and proliferation of the parasites. With that in mind, we selected eight established PI3K and mTOR inhibitors for profiling against these pathogens. Among these inhibitors is an advanced clinical candidate against cancer, NVP-BEZ235, which we demonstrate to be a highly potent trypanocide in parasite cultures, and in a mouse model of T. brucei infection. Additionally, we describe observations of these inhibitors' effects on parasite growth and other cellular characteristics.

Visceral leishmaniasis: what are the needs for diagnosis, treatment and control?

François Chappuis,  Hashim Ghalib,  Jorge Alvar … (2007)
Visceral leishmaniasis (VL) is a systemic protozoan disease that is transmitted by phlebotomine sandflies. Poor and neglected populations in East Africa and the Indian sub-continent are particularly affected. Early and accurate diagnosis and treatment remain key components of VL control. In addition to improved diagnostic tests, accurate and simple tests are needed to identify treatment failures. Miltefosine, paromomycin and liposomal amphotericin B are gradually replacing pentavalent antimonials and conventional amphotericin B as the preferred treatments in some regions, but in other areas these drugs are still being evaluated in both mono- and combination therapies. New diagnostic tools and new treatment strategies will only have an impact if they are made widely available to patients.

Tara L. Brown,  L J Vlahos,  William F. Matter … (1994)
Phosphatidylinositol (PtdIns) 3-kinase is an enzyme implicated in growth factor signal transduction by associating with receptor and nonreceptor tyrosine kinases, including the platelet-derived growth factor receptor. Inhibitors of PtdIns 3-kinase could potentially give a better understanding of the function and regulatory mechanisms of the enzyme. Quercetin, a naturally occurring bioflavinoid, was previously shown to inhibit PtdIns 3-kinase with an IC50 of 1.3 microgram/ml (3.8 microM); inhibition appeared to be directed at the ATP-binding site of the kinase. Analogs of quercetin were investigated as PtdIns 3-kinase inhibitors, with the most potent ones exhibiting IC50 values in the range of 1.7-8.4 micrograms/ml. In contrast, genistein, a potent tyrosine kinase inhibitor of the isoflavone class, did not inhibit PtdIns 3-kinase significantly (IC50 > 30 micrograms/ml). Since quercetin has also been shown to inhibit other PtdIns and protein kinases, other chromones were evaluated as inhibitors of PtdIns 3-kinase without affecting PtdIns 4-kinase or selected protein kinases. One such compound, 2-(4-morpholinyl)-8-phenyl-4H-1-benzopyran-4-one (also known as 2-(4-morpholinyl)-8-phenylchromone, LY294002), completely and specifically abolished PtdIns 3-kinase activity (IC50 = 0.43 microgram/ml; 1.40 microM) but did not inhibit PtdIns 4-kinase or tested protein and lipid kinases. Analogs of LY294002 demonstrated a very selective structure-activity relationship, with slight changes in structure causing marked decreases in inhibition. LY294002 was shown to completely abolish PtdIns 3-kinase activity in fMet-Leu-Phe-stimulated human neutrophils, as well as inhibit proliferation of smooth muscle cells in cultured rabbit aortic segments. Since PtdIns 3-kinase appears to be centrally involved with growth factor signal transduction, the development of specific inhibitors against the kinase may be beneficial in the treatment of proliferative diseases as well as in elucidating the biological role of the kinase in cellular proliferation and growth factor response.

Christian Schnell,  Kevin Schoemaker,  William Sellers … (2008)
The phosphatidylinositol 3-kinase (PI3K)/Akt/mammalian target of rapamycin inhibitor (mTOR) pathway is often constitutively activated in human tumor cells, providing unique opportunities for anticancer therapeutic intervention. NVP-BEZ235 is an imidazo[4,5-c]quinoline derivative that inhibits PI3K and mTOR kinase activity by binding to the ATP-binding cleft of these enzymes. In cellular settings using human tumor cell lines, this molecule is able to effectively and specifically block the dysfunctional activation of the PI3K pathway, inducing G(1) arrest. The cellular activity of NVP-BEZ235 translates well in in vivo models of human cancer. Thus, the compound was well tolerated, displayed disease stasis when administered orally, and enhanced the efficacy of other anticancer agents when used in in vivo combination studies. Ex vivo pharmacokinetic/pharmacodynamic analyses of tumor tissues showed a time-dependent correlation between compound concentration and PI3K/Akt pathway inhibition. Collectively, the preclinical data show that NVP-BEZ235 is a potent dual PI3K/mTOR modulator with favorable pharmaceutical properties. NVP-BEZ235 is currently in phase I clinical trials.

Publisher ID: PNTD-D-11-00283
DOI: 10.1371/journal.pntd.0001297
PMC ID: 3160303
PubMed ID: 21886855
Copyright statement: Diaz-Gonzalez et al. This is an open-access article distributed under the terms of the Creative Commons Attribution License, which permits unrestricted use, distribution, and reproduction in any medium, provided the original author and source are credited.